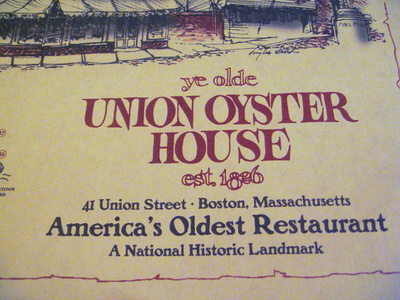 After hours of shopping, we wound up at Union Oyster House, another place that had been suggested by HB’s friend.  When we approached, we got the sense that it was somewhat a tourist trap, but it looked fun, so we were game for some oysters and yumms… 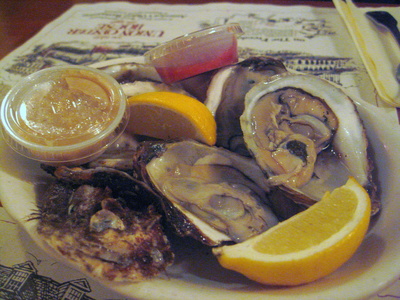 Unfortunately, we stopped ordering oysters after the first 6.  Gritty, dirty, flavorless… pretty darn blah.  We’d ordered these at the bar while waiting for our table; we wound up finishing up and not ordering more food till we got upstairs to our table. 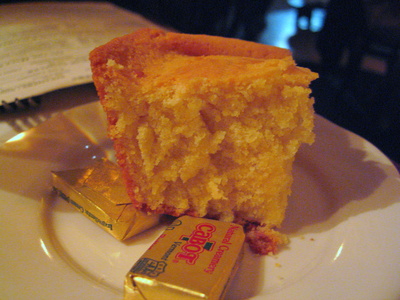 Immediately, we were served monstrous slabs of corn bread.  HB and I both found these pleasant to pick on while we sat there, deciding on what to order. 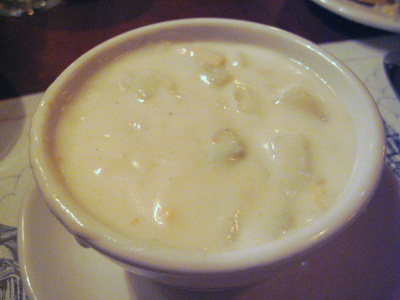 We both opted to order set meals that included a bowl of their world famous clam chowder (so it said).  Well, it was cold and rainy out, so the clam chowder was also very tempting. 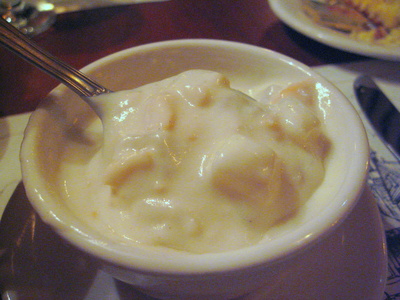 It hit the spot.  Creamy, smooth, slightly smoky (from bacon, perhaps?!), with lots of chunks of potatoes and clams punctuating the delicious chowder, it was excellent.  The small cups were the perfect size to whet our appetites for what was to come; not so much to overwhelm or stuff, but just… right. 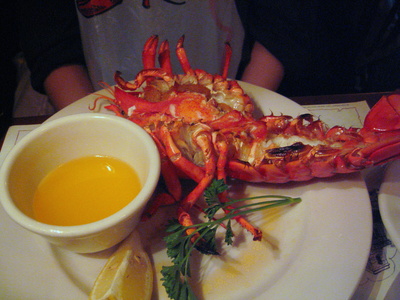 HB ordered the stuffed broiled lobster.  I know she enjoyed this dish thoroughly, telling me she’d have ordered the same as I did except she was feeling too lazy to wrestle with a lobster to open up and get to the meat.  Unfortunately, she said the “stuffing” placed atop the lobster halves was a bit bland; the lobster itself, however, was yummy. 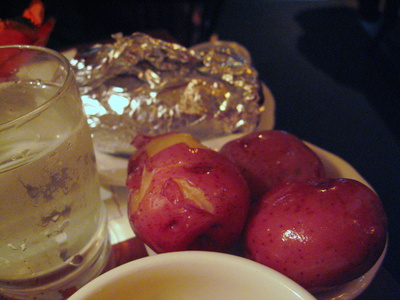 She received a baked potato (tin foil in the background) and I received red bliss potatoes, which I didn’t touch.  You’ll see in a minute why… 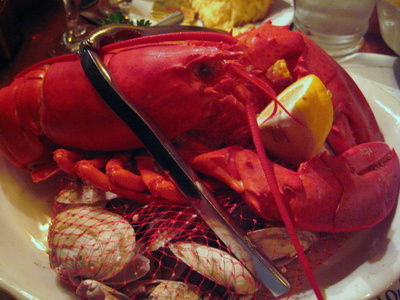 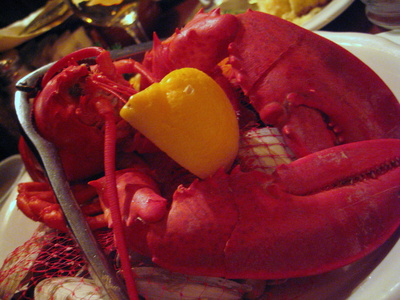 Yup.  I ordered the ginormous huge momma lobster bake, complete with 1.5 lb. lobster, steamers (choice of steamers or mussels; I’m not a fan of mussels but I LOVE steamers!), corn on the cob, potatoes, cup of chowder, and dessert.  Funny story about dessert.  Well, I’ll tell you in a bit.

I tore into that lobster like my life depended on it.  It was a lot of fun, a good amount of work, and absolutely delicious.  Sure, the place is a bit touristy, and maybe it wasn’t worth the $40 for what I got (who am I kidding – yes it was!), but the lobster was tasty, cooked properly, as were the clams and all.  The corn was a bit overcooked, but then, these things usually are, when they’re all tossed into a mesh net to steam/boil all at once.

Cute story about the corn – of course, this giant lobster came with a cup of melted butter for me to dip the lobster in.  I was done with the lobster and clams, was starting on the corn, and was dipping one finger into the butter, sliding it down the corn, then nibbling away, then repeating.  A waitress (not OUR waitress) walking by stopped short when she saw me doing this, said, “That’s a new one, oh my gosh, that is SO adorable,” and I looked up, a bit confused.  “I’ve never seen anyone put butter on their corn like that, with their finger,” she explained.  I just looked at her and finally said, “Oh, um, thanks, how do they usually do it?”  (I had not been provided butter pats with my main platter.)  She pointed at the butter pats provided with my cornbread and said “They use that?” and then strolled off, giggling.  Ummm… ok, weirdo!  It was easier to do it my way, and slightly healthier as I wound up using much less butter than I would have had I used the pats (which tends to not melt and just clump! HMPH!).

When it was time for dessert… the menu had stated I would receive spice cake or Indian pudding.  I wasn’t sure about either, so I asked the waitress about them, and she informed us that Indian pudding was actually something served at the first Thanksgiving that Indians (Native Americans) made and ate frequently and was quite lovely.  I hesitated and she winked at me, then said, “You know what, we’ll get you both, don’t tell anyone ok?”

So we had both. 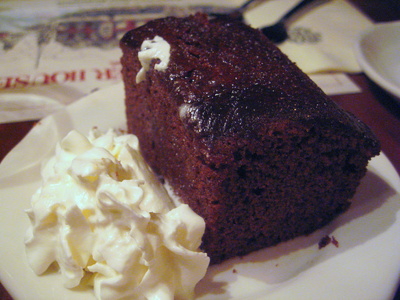 The spice cake was fragrant, arriving warm and dense on a plate.  I liked it about as much as I can stand ginger (which I think was the main spice in there); a bite or two and I was done. 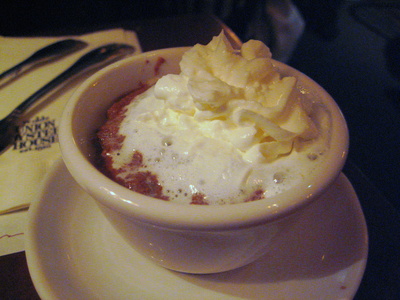 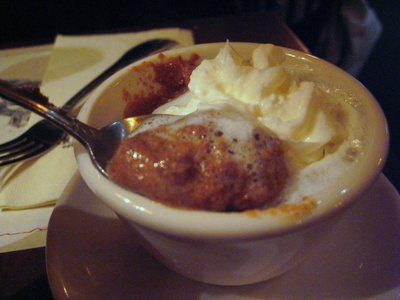 The Indian pudding was as good as it looks.  Take that as you will.  I don’t want to talk about it.

Yvo says:  HB and I agreed that we probably wouldn’t go back, but it was the perfect place to take out-of-towners on vacation or first time visiting Boston.  There is a lot of history there – the dark paneled walls, the oldest restaurant in the country, the entire story printed on the back of each menu – it was fun.  Everything was decently priced; considering what we got, with a great tip for an awesome waitress, we paid $130 total.  It was a fun outing, and though I wouldn’t get oysters there again, everything else was tasty, with great service and a fun atmosphere, it was a great evening out.  It’s also very close to Faneuil Hall & Quincy Market; you have to take first time visitors to Boston to those places!
recommended at least once