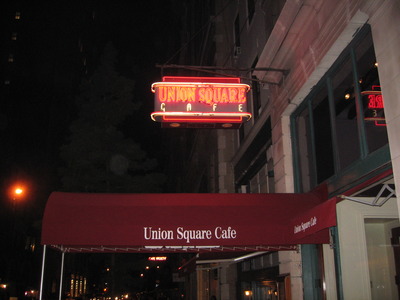 The House that Hospitality built… hehe.  HB and I had recently discovered we both wanted to try Union Square Cafe, and she had the foresight to make reservations for a night we were both free.  Away we go…

The decor as you step in immediately explains the name.  It looks like a very cute cafe.  A nice cafe, but a cafe nonetheless.

Something that I must say immediately: our service was extremely odd.  I won’t say poor, because we were not ignored, nor were we treated rudely, just… our server gave us our menus, but did not offer us a wine list, nor did he ask us if we wanted anything (besides water) to drink.  He didn’t offer us coffee at the end of the meal, either, and in fact, gave us little to no guidance whatsoever.  However, a table that was seated next to us – also two women, though considerably older – were offered all of these things, by the same man who did not ask us.  Very weird. 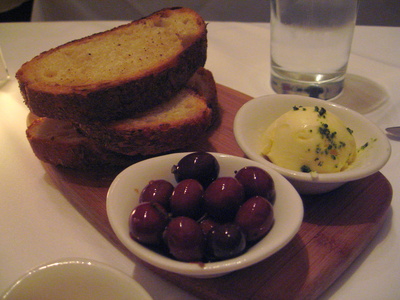 He also brought us our side order with our appetizer… and removed my bread plate and knife before I was done, while leaving HB’s bread plate and knife.  (Was he telling me to stop eating bread because I’m fat enough as it is?  I really do not know.)  And, perhaps even more strangely, I’d moved the olive pit dish to my side of the table (the bread board were on the opposite side of the table, as far away from me as possible), as HB doesn’t eat olives and it seemed gross to leave my pits over there by the bread… or to put the pit in my hand or on my fork in order to deposit it (and by “put” I mean “spit”).  But as soon as the server appeared, he took it away from me to put it back next to the bread board.  Again, I thought perhaps to make room for our entrees, but no entrees were forthcoming for another good, long while.

And on to the food, which is the real reason anyone comes on here, right?  🙂 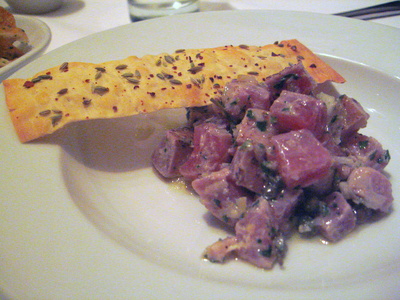 We opted to start with the seared yellowfin tuna tartare with pantelleria capers, lemon, extra virgin olive oil and spicy fennel cracker.  I thought the flavor was spot on, lemony and with the spicy fennel cracker, great, but eating the tartare solo, as HB opted to do, I found the texture severely lacking.  A big pile of mush, tasty mush but mush regardless.  I chose to eat it with the cracker, which fared much better, but still, something with a bit of crunch strewn atop or throughout might have worked better for the dish. 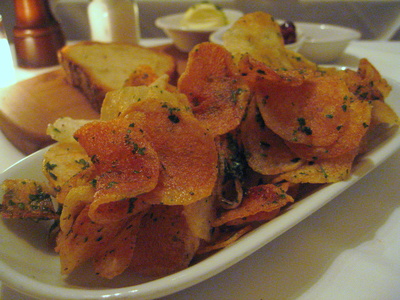 The side dish we ordered, hot garlic potato chips, was absolutely delicious, though I question why our server brought it out with the tuna tartare.  I really enjoyed these, though HB noted how full she got and how quickly from the chips alone.  Put it this way: I would definitely go back to eat these with a cocktail or two at the bar.  I really love garlic, though. 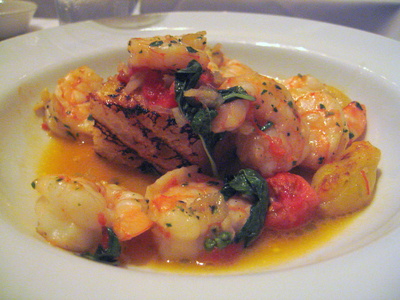 HB ordered the fresh Gulf shrimp and roasted heirloom tomato brodetto with grilled filone.  Filone is the big hunk of grilled bread in the center.  HB commented that this was a ton of shrimp, somehing she hadn’t expected, and that while the shrimp was cooked to perfection, and the dish was good, it certainly wasn’t anything amazing or interesting.  It was as to be expected for what you’re paying (which, in this case, was $31). 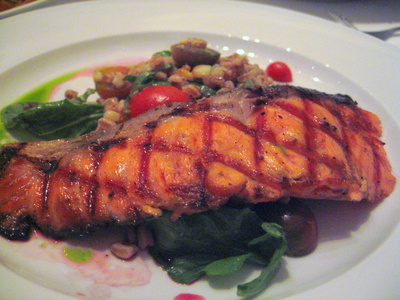 I ordered the grilled king salmon with toasted farro, sweet corn, cherry tomatoes and basil vinaigrette.  I was impressed with how exceedingly crispy the outside was, yet how moist the inside remained.  Otherwise, the salmon had no real flavor to it aside from “salt”, which probably added to the crispy exterior, and lacked any sort of oomph or other interesting counterpoint.  The sweet corn was barely evident (I had two small sections of corn, about an inch long by a half inch wide, hiding under the salmon), and the farro, cherry tomatoes, basil vinaigrette all were regrettably unremarkable.  It’s tomato season, and this is inexcusable.  The salmon was large enough that I actually couldn’t finish it, my stomach feeling so full from the chips and all.

As I mentioned before, though the server brought us a dessert menu without us requesting one, he failed to offer us coffee, tea, any sort of hot drink to round off our night.  We were way too stuffed to order dessert, though there were some items that piqued our curiosity.  We probably won’t be back just to sample dessert, though; what we did sample was so mediocre as to be enough for us.

Yvo says: Sure, things were tasty here and there.  Yeah, I liked some dishes, I think I even liked more things than I didn’t like.  The weird service could have been just a fluke (we had a weird server at the next place we went to, a wine bar – after ordering a bottle, the waitress asked us how many glasses we wanted.  There were only two of us; did she think the bottle was for just one of us???), and I can overlook that.  But for $53/person (with a decent tip), no alcohol and just what you see above, I think I’ll pass on the extremely standard food offerings and spend my money elsewhere.
I wouldn’t go out of my way, but nor would I avoid it – tasty enough to receive a mild recommend rating

« NY Mag’s "Highbrow" BBQ – All You Can Eat, SUPPOSEDLY
Tamarind »