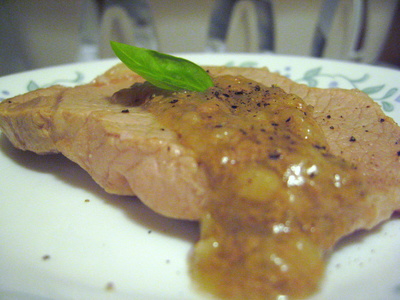 I’ve been teasing you with this picture across the blogosphere for a week now. So, finally, here it is without further ado: the recipe!!!

Really simple, honestly, but the resulting dish is super flavorful and tender… and healthy, too!

Soak the pork chops in a gallon ziploc bag, laying it on its side. You don’t need to use the whole bottle of tea here – in fact, I suggest you don’t – just enough so that they’re in the liquid. I think I used about a cup, cup and a half; squeezing out all the air from the bag and spreading the pork chops out one their sides in the bag worked out well for me, allowing all sides of the chops to be in contact with the liquid at all times.

Soak for an hour or so, turning once (just flip the bag, much easier). During this time, enjoy the rest of that bottle of tea – you earned it. 😉

Heat a heavy bottomed skillet. Remove the pork chops from the tea (reserving tea), and season each side with salt and pepper. Sear the pork chops, turning only once. Remove chops from pan and set to one side, allowing to rest so the juices can redistribute.

Deglaze pan with the tea in the bag, allowing to reduce. Add some salt, peppeer, a bit of butter and the flour to thicken – you’ll probably want to whisk it. I stupidly did not, which explains the lumps in the above picture *hangs head in shame* – I was in a hurry – those are not fruit chunks. Reduce to thickness and consistency desired/preferred.

Pour over pork chops and enjoy! Good served with plain white rice, risotto, mashed potatoes, whatever you like!

Honestly, I was surprised myself at how delicious the reduction came out. It was surprisingly fruity but savory at the same time; meanwhile, the soak in the tea made the flavor penetrate the entire pork chop, and kept it really juicy and moist at the same time. Just overall delicious, and the antioxidants in the tea surely translate, making this really healthy since we didn’t even use oil to sear the pork chops!!!

(Unnecessary garnish alert: in the picture, that’s a teeny leaf from my basil plant on my windowsill, but it’s totally just to color contrast on the plate, since originally it was mostly one color.)

Don’t forget to enter my contest here for free lunch at Pump!

This recipe is part of the few I created for the Cafe PureLeaf event… be sure to drop by if you can!!!