After having read about New Pasteur on Midtown Lunch’s Downtown Lunch feature, StB and I headed over that same day to check it out.  We’d both been to most of the Vietnamese restaurants on that block before, separately, and were both surprised that New Pasteur was the one most prominently featured in the entry and its comments. 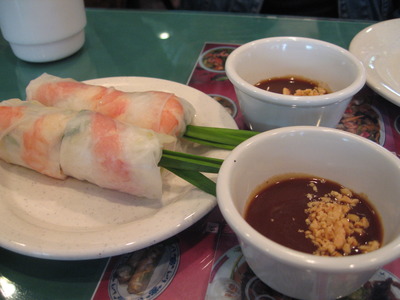 We opted to split, per my craving, an order of the summer rolls.  I liked that they gave us each our own dipping sauce because I am a liberal sauce dipper, and this meant I could double, triple, quadruple dip as much as I so chose!  The summer rolls themselves were nothing outstanding nor of note. 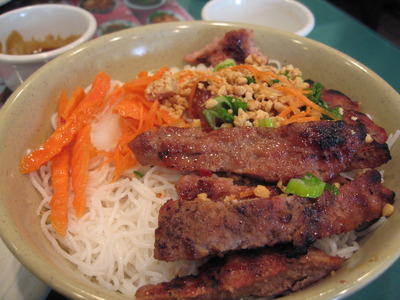 As it turned out, we also both ordered our own bun (pronounced boon, downtone).  Cold vermicelli noodles layered over shredded lettuce and cucumbers, topped with peanuts, pickled vegetables, and your choice of “meat” (spring rolls are included in this choice), we ordered the grilled pork.  I haven’t ordered this in a long time – generally opting for a different kind of meat (lemongrass beef) – though StB said she orders it quite frequently.  This was probably the first dish I ever had at a Vietnamese restaurant, back maybe 10-15 years now…

except when it arrived and we began eating, we were both surprised that the pork was actually closer to a meatball than the thin pork slices we’d expected, and generally receive at most Vietnamese restaurants when ordering this.  The meat reminded me vaguely of kofte (though, being Turkish meatballs/sticks, they are definitely not made from pork) – soft, intensely flavored, and grilled with a nice char on the outside to give it an extra oomph of flavor.

Overall, our bun was good, but nothing mind blowing or outstanding.  I think I’ll continue to go next door, to whichever place it is whose name completely escapes me but my friends know that’s where we’re going… haha.

Yvo says: Tasty, inexpensive, and the best bonus was how not-busy it was when we arrived close to 1 pm on a warm Friday.  The other places tend to get so crowded that I can easily spend half of my allotted lunch hour waiting for a table, which means I have to wolf down my food.  Which sucks.  I could see myself going here if my normal place is packed and this one isn’t, and being pleased with my choice, but I don’t think I’ll go out of my way for this place…
more recommended than not