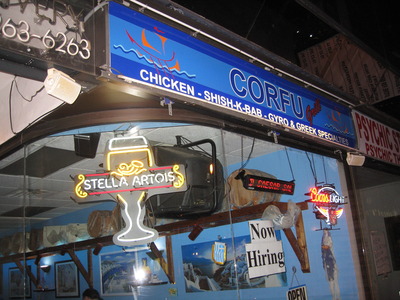 A few weeks back, my friend Izzy and I met up for dinner after not seeing each other for months.  It happens often with us; we’ll email a lot for a few weeks, then life grabs hold and away we go… then months later, one of us will think to herself, “Oh hey, what’s she doing…” and then we’ll meet up.  I can’t say it’s always like no time has passed, as we get older, things do change, but I can say that I always have a good time, and I value her friendship, especially insomuch that out of everyone I am friends with, she and I have the most similar (but still completely different) career aspirations.

I mentioned I’d moved recently, and Izzy was quick to suggest somewhere local.  Surprisingly or ironically, she knew more places in my neighborhood than I do – considering I grew up in this area, and she didn’t, it was pretty funny that she easily rattled off a list of places of which I’d never heard.  I was game for some Greek, though, having just recently hung in my apartment the painting I acquired while in Greece last year, and was super excited to see a few dishes that I crave constantly. 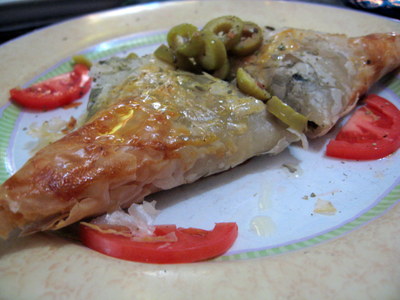 When I arrived a few minutes late (okay, 15), the ever-hungry-but-still-tiny Izzy had already ordered a spinach pie, which was ginormous, and was attempting to work on it.  I took a piece and found it pleasant – I’ve actually never had spanakopita before, I’m not sure why, but I liked this quite a bit.  It wasn’t under- nor over- stuffed, and had just the right amount of spices. 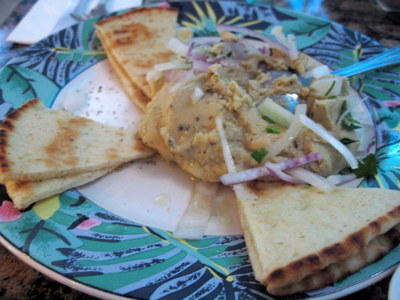 The hummus was fairly standard, a bit tighter than I like my hummus.  I genuinely prefer Sabra brand hummus (roasted pine nut), but I know that’s a personal preference.  I like it very creamy, spreadable, and soft, while this was still tasty, just not as smooth and creamy as I like.  The pita bread was cold, which was a turn off, but tasty nonetheless. 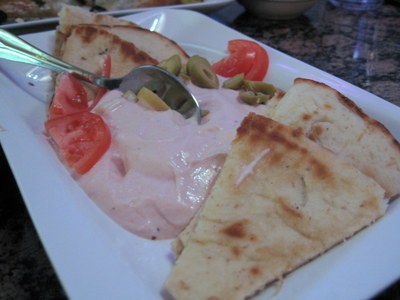 I was especially excited to order the taramasalata, which I’ve blogged about plenty of times.  The jarred kind has a tinny, metallic taste to it, so I was hoping to find a place I could order from cheaply and easily to replace that option.  Unfortunately, this tasted like the jarred kind but thinned out with more yogurt.  The olives added a nice extra kick to it, but in the end, it tasted about the same as the jarred kind, and that’s a no-go in my mind (might as well buy the jarred kind then!). 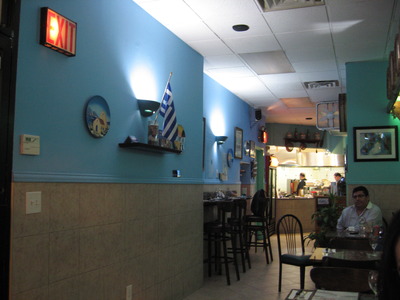 I should mention here that the prices were super cheap for all the food we got, and that the proprietor was really friendly.  I walked to the back when I first got there, to check out what was behind the glass cases, and he immediately appeared to explain what each item was.  Though I didn’t snap a photo, they also had “milk pie”, something I had while we were in Greece and though I hadn’t liked it much, PB/MD had, and I haven’t seen it in any stateside restaurants, so that made me feel like the place was that bit more authentic than other places that cater towards the American tongue instead. 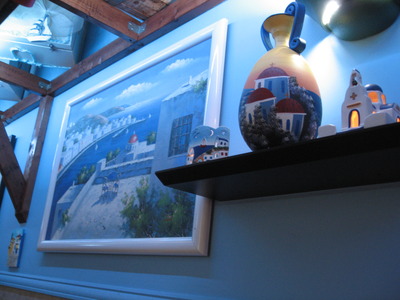 the crazy lights that made photos a nightmare

Izzy and I both opted to order the combination platter.  The proprietor, who was taking our order, stopped and said “That’s a LOT of food,” and looked at us.  We both smiled and said “We like leftovers!” and he reminded us again that it was a lot of food.  I think he was amazed that we even thought we could eat that much, but it didn’t sound like that much! 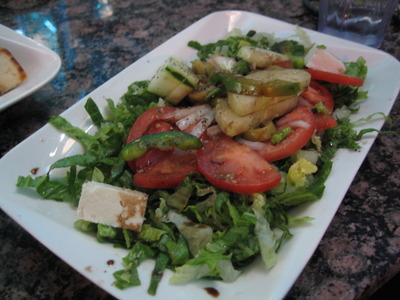 Platters all include a salad… as you can see, this included olives, tomatoes, onions, cucumbers, Romaine lettuce, haloumi cheese, mint and a drizzle of balsamic vinegar.  I found the salad to be fresh, light and refreshing, though there really was a ton of it. 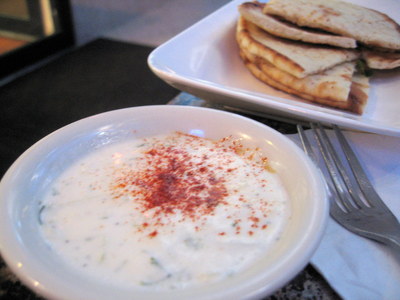 The platters also came with our own dishes of tzatziki, of course, and more pita bread (still cold). 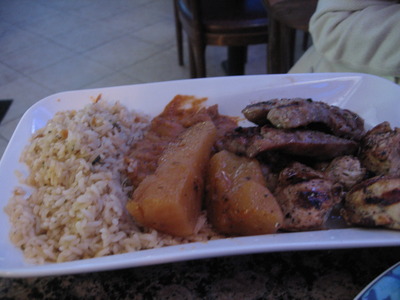 Izzy chose the Greek sausage and chicken as her meat.  It also came with rice and these giant yuca-like potatoes.  I said, “Maybe it’s salsify!”  It was really dense and starchy, just like yuca… but I’ve been wrong before, so who knows?  I know Izzy liked her platter, though she packed most of it to take home because… yes, it really was way too much food. 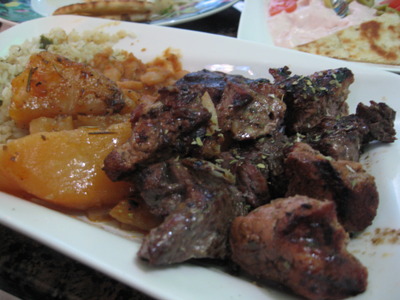 My choice of lamb soulvaki and beef kebab was definitely an excellent one.  The lamb had not one trace of gaminess to it – not a hint !!! – which pleased me greatly, and the beef was super delicious as well.  It was cooked exactly right- it still had the signature chew to a kebab, but wasn’t hard.  Seasoned properly and very, very tasty.  I can definitely see myself ordering from here, even going here a few times and bring some people there.  I won’t say it was top notch, I can’t really make claims to its authenticity, but I can say it was pretty darn tasty. 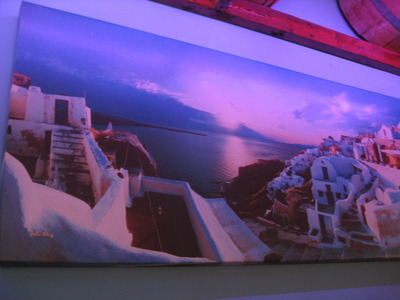 Of course we were too stuffed to order dessert.  My leftovers made it into bento the next day.

Yvo says: A great neighborhood place.  Not destination dining, but hardly anything seems to be these days.  I would definitely go back, as the atmosphere was casual and perfectly conducive to just sitting and chatting with a friend, catching up and gossiping.  With a generous tip, my portion of the bill (for exactly half of everything) came to $25.  Not bad considering how much food we got (totally overordering)… I bet I could go and eat like a king for $15.  Yummy!
recommended