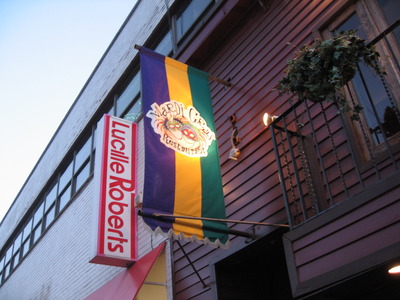 Mardi Gras, as the name suggests, is a restaurant specializing in Louisiana/New Orleans/Southern/Cajun/Creole cooking.  A pretty lofty goal, I admit, and though I’d been here once before – uhhh, 5 years ago, actually, possibly to the day (my memory has weird quirks: I know with whom I went, I know I almost slapped him, but I have no idea what I ordered nor if I liked it or not, and most days, I can’t remember what I ate yesterday, which is why I take pictures of everything… that, and I like to) – I was game to try it again recently for my best friend and I’s occasionally dinner meet up (we’re both very busy people!).

Its location on busy Austin Street in Forest Hills, Queens, makes it a great location to attract the younger crowd before or after a movie for dates.  However, the Tuesday night we went, it didn’t seem busy at all and I wonder if that’s because the young people who tend to hang in the area might prefer sticking to the larger chain restaurants that also occupy Austin Street’s general area: TGI Friday’s, Pizzeria Uno, Johnny Rockets…

In any case, the emptier location was a welcome relief – for me, from my annoying coworkers, from other noisy restaurants, from work in general, and for her, from the cacophony of patients she’d been dealing with.  We chatted away our night, but you’re not here to listen to me blather about our friendship…

LTS had done her research beforehand, and told me that reviews had said the ribs were good.  After much debate, we actually wound up both ordering the ribs, along with an appetizer to share of fried crawfish.

We found the dish tasty enough – most things deep fried are pretty tasty if you like fried stuff, as we do – but inconsistent throughout the dish.  For example, I picked up a piece and tasted it plain first to get a handle on whether it needed sauce.  I thought my piece was a bit blandly seasoned, and was about to comment so, when LTS picked up a piece, ate it, and said “Hmm, that’s kind of salty,” to my surprise.  So I tried a piece from her side and she tried a piece from mine, but the inconsistency was sprinkled throughout.  Some pieces were entirely too much batter, and others were just right, crispy and delicious.  We still finished the whole plate, and overall agreed that it was good, but the inconsistency was of note. 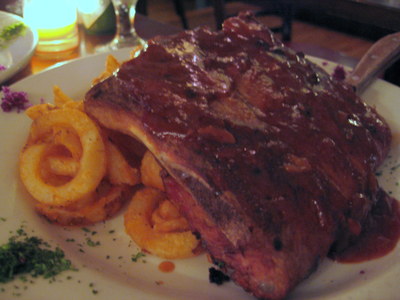 On the menu, the St. Louis ribs came with mashed potatoes, but I envisioned attempting to eat ribs with my hands and then trying to fork some mashed potatoes, so I requested a change to curly fries, which the waitress didn’t make a comment.  When LTS ordered, she wanted sweet potato fries, and again, no argument from the waitress.  (Sometimes when I want to make substitutions, I notice servers give me a problem or forget, so this was a bonus point for her.)

I have to say, these ribs were really good!  The meat separated easily from the bone (the way I like them to; I know some people prefer ribs that stick to the bones and you chew off the meat), and the sauce was very flavorful.  Not quite the same as my own personal recipe, but still a nice tangy kick to the BBQ and enough sauce to really meld the meat together.  The fries were fairly standard, and LTS liked her sweet potato fries.  I wound up taking a few ribs home and eating them for lunch the next day.

The prices were reasonable, not expensive nor cheap, and we were both satisfied with everything.  One odd thing to note was we were both starving when we sat down, and to our dismay, every table around ours but us got a basket of bread.  We received nothing!  I was surprised and so hungry that I wanted to tell someone, but no one was around, either!  I don’t really know what was up with that, but whatever… Also of note is that most people leaving the restaurant carried a bag of leftovers, so order accordingly.

Yvo says: While not actually a chain (or perhaps it is, and I just don’t know any other locations?), the food, location and decor hold up as though a chain – nothing outstanding and nothing horrible either, comfortable for people to keep going back to, and standard American fare cuisine (with a smattering of more Louisiana-geared items, like po’boys and crawfish dishes).  Not a big deal but not a huge disappointment either.
middle of the road… recommended if you’re in the area and bored of more mainstream American fare as is dominant in the area