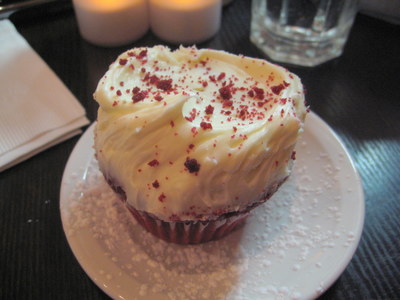 I’ve never claimed to be a cupcake fanatic.  In fact, searching on my blog, I’ve discovered that I’ve only mentioned cupcakes a handful of times, and mostly none are worth linking to here… (though Cakeman Raven does have the best red velvet cupcakes everrr and recently I discovered a place near work that has friggin fantastic red velvet cake slices, about a week after I tried them, TONY came out with their food issue and declared them best red velvet cake in the city, okay thanks TONY for agreeing with me!)  Anyway, I’m not that big on sweets, I hate baking, just… yeah.

BUT… after dinner recently, I was walking around and passed by for the millionth time… Martha’s Country Kitchen on Austin Street in Forest Hills, Queens.  My best friend and I have wandered by and even gone in at least 5-10 times now, drooling over the goodies in the glass case, but usually I am too stuffed.  I think once she bought a cookie to take home, and liked it.

On this occasion, I was way hyped up on caffeine and so went in after my companion said it was a nice place.  We were seated promptly, though it took a while for a waiter to come over and take our order.  We both ordered red velvet cupcakes. 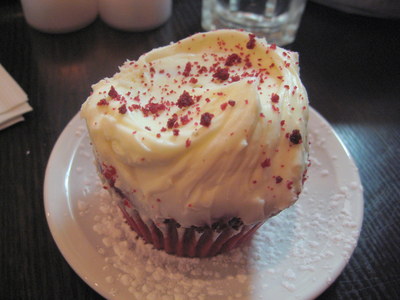 The picture looks so promising!!! unfortunately it did not deliver on its promise of moist deliciousness.  The cake part itself was alright, though closer to the dry side than I’d have liked, but the frosting was just off.  I don’t know what’s exactly in most cream cheese frostings, but it wasn’t… it just wasn’t good.  Perhaps some lemon extract or more vanilla or more sugar – and I never thought I’d say that – it just didn’t taste right and was a horrible disappointment.  I ate most of the cake with no frosting just to choke it down.  I was truly disappointed with this cupcake.

Yvo says: Meh meh meh for the red velvet cupcake!  I’ll still go in and look occasionally, I’m sure, and perhaps eventually I will be able to try a giant sized cookie – I am still looking for a cookie on par with this one! (Photo taken October 2006 at Barnes & Noble near Lincoln Center before watching La Boheme; I assure you, I am extremely tan in that photo, having just gotten back from Mexico, and my hair had been permed fairly recently; I look nothing like that now!  And the cookie was delicious, toffee chocolate something or other, bought at the Starbucks inside that BN, and I was told it’s seasonal so I haven’t found it again… BOO…)  But otherwise, it’s only so-so… but does fill a niche need on Austin Street as a cafe/hang out spot, as even on a Monday night it was pretty busy, lots of young people hanging out, grabbing a nightcap after a movie or a date…
can’t really tell yet, I only had one cupcake

« KITCHEN SAFETY (and a recipe, sort of)
Chili Nachos… again! »