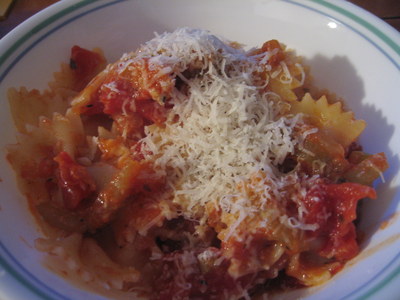 Pasta is becoming a weekend habit… Not really a bad thing; I avoid carbs much of the work-week so it’s nice to ease up on weekends, right?  Well, BF came over to play Tribal Wars and watch TV with me, (yes, we really are that nerdy!) so I handed him a cookbook and asked him to pick a recipe.  After a few minutes of him browsing, he handed it back and said, “I don’t know, you pick, I don’t feel like looking through this!” and so I decided to go to my new standby.

Last week’s pasta!  Except I had no more ricotta, and no ground veal, and no desire to go get some, either.  So I decided to just make bowties and the marinara sauce described, with a few exceptions:

The result was still delicious, but definitely different, with big chunks of tomatoes scattered throughout, tasty. 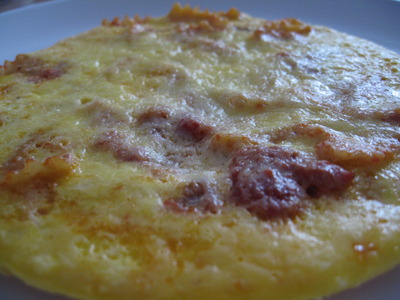 Here’s what I did with it the next day: made a pasta frittata.  Although I forgot to check her recipe first, so this is what I did:

Small frying pan; drizzle of oil.  Add a few scoops of pasta from fridge; stir around to heat.

Beat two eggs with a dash of salt in a bowl.

Once the pasta appeared to be hot enough, I poured the beaten eggs over pasta and let set for a minute or so, grated both Pecorino Romano and Parmesan over the top, then popped the whole thing in the oven which was set on broil.

Here’s where it gets interesting… and here is my KITCHEN SAFETY PUBLIC SERVICE ANNOUNCEMNT for the year.  (Well, I hope it’s the only one I have to give this year.)

and then I barehanded the pan before throwing it back down on the stove shrieking in pain while the dog looked on, curious.  On the bright side, I did not miss the stove completely, throwing the pan on the floor and thereby both hurting my dog seriously and losing my breakfast (literally).  Sigh.

Yes, I burned my hand pretty seriously, or at least seriously enough that it hurt the entire day and I was crying at one point from how badly it hurt (initially I ran cool water over it – DO NOT PUT ICE DIRECTLY ON A BURN, nor cold cold water, because your hand will go into shock; but I had plans to go to the baseball game, so I wound up grabbing a cold bottle of water and held that to my hand for most of the game, until I drank it all, and going home was agonizing because it wouldn’t stop throbbing, started to swell, and anything touching it hurt like mad).  I’m not a stranger to pain- I AM a woman, after all!- but it was really bad pain.  I took a couple of painkillers and went home to continue holding cold items.

The worst part of this whole ordeal, for me, was that my frittata I guess sat too long in the hot pan while I tended my hand, and came out super rubbery, not even that tasty.  At least if it was good, it’d have been more “worth it”…

Well, guys, be safe, don’t be an idiot like me.  ALWAYS USE A POTHOLDER!!! and ALWAYS PAY ATTENTION.  I’m still not sure what went wrong and how I could have just been all la di da, two seconds and just… oh, whatever.  My hand is much better today, and we’ll thank the stars for that.