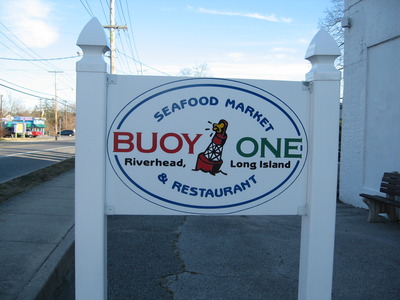 For FeistyMom’s birthday recently, the sibs and I (if you must, we can call them FeistySibs, but by far the Feisty title belongs to one of us and only one!) decided to take her out for a day of shopping out at Tanger Outlets. After a long day of shopping, of course we got hungry and the FeistySibs chose to take FeistyMom to partake in seafood – her favorite! – at a place both of them have been many times and which, sadly, I hadn’t yet been able to go for the awesome lobster. (Here is my brother’s review from a previous visit – he has some of his information [not prices, minor details] wrong.)

When we first drove up, I was kind of like, uhhh because this is basically a fish market, and looks like one, and I was surprised. I won’t say nervous, because my sister and brother-in-law are notorious for finding great deals for good food – while they love food almost as much as I do, they are entirely unwilling to pay high prices for food 99.9% of the time, decreeing GREAT food can be had for LOW prices. I DO NOT DISAGREE, but I also wholeheartedly embrace the idea that there are some transcendant dishes that are just going to cost you a lot. Anyway, I trusted that the food would, at the very least, be good and cheap, but after hearing how great it was, I was just caught a little off guard. Whatever! Let the birthday feast begin!

Upon much debate, all of us ordered the same thing: the Buoy One clambake, which includes lobster and a bunch of other stuff for just over $20. AWESOME price… until the waitress came over to tell us that they were out of lobster because of the down season. Boo…

So instead, we had: 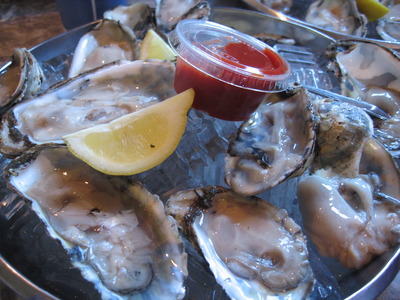 2 dozen raw oysters, my brother suggested. (Horseradish came separately) I prefer my oysters with just a squirt of lemon, sometimes maybe apple cider vinegar a la Pearl Oyster Bar (ohhh, my stars)… but these were good, though the shells were super muddy, a bit of a turn off as I like to slurp my oysters straight from the shell. Whatever, still good. 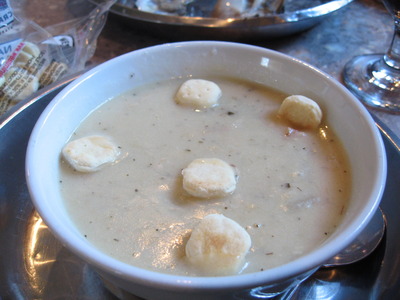 New England clam chowder- my brother and I each had our own bowl. Good, but not outstanding, and almost a waste of stomach space, as I was quickly filling up… 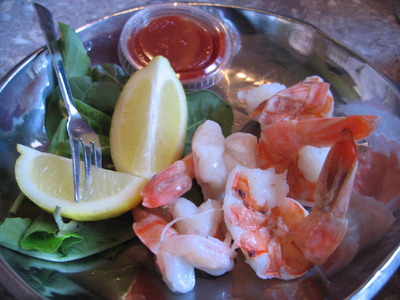 My brother’s shrimp cocktail. I tried one. Nope, I still am not a huge fan of shrimp (probably OD’d on them when I beertended at a seafood bar for 4 summers – I ate so much shrimp…) – these were sweet, fresh, good, but nothing special. 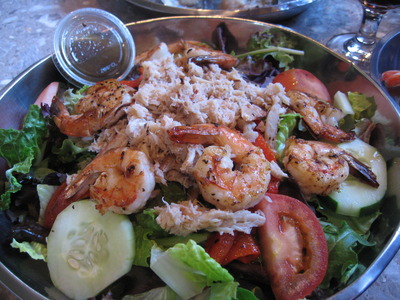 Seafood Cobb salad – as you can see, contrary to the one my brother had, no avocado (though they’re not quite in season, so I’m fine with not having them), and the crab meat was definitely not freshly or hand picked; it was canned. Still, not bad, though the provided balsamic dressing fell far short and flat, I thought the greens were fresh and yummy. 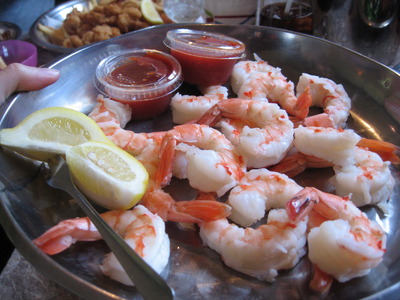 My brother ordered more shrimp. He liked how big and tender they were. 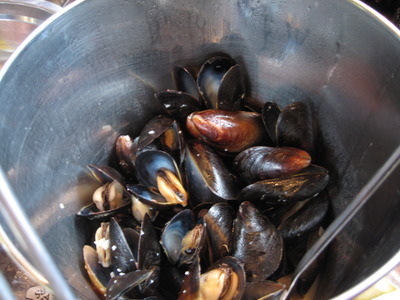 He also ordered a bucket of mussels (this picture was taken when he was more than half done already). I tried one; if you search “mussels” on this site, you’ll see that I’m convinced I should like mussels, and keep trying them, and keep being disappointed. I actually – gasp! – liked the one I tried, but not enough to have another one. Maybe it’s time to give up?

FeistyMom’s Asian-inspired fish dish; I know she really liked this, and kept insisting we all try some (no, really, she is that kind of person who, when she likes something a lot, will insist everyone try it; I am the kind who, when I really like something, will keep it to myself unless I really like you). I only tried her veggies, though, since I was extremely full at this point, to the point where I may have wanted to throw up, and the veggies were perfectly cooked – still crunchy!!! which is a gripe I have with veggies at most non-Asian places, they seem to constantly be overcooked to the point of mush. 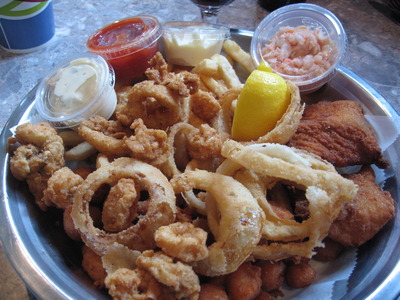 FeistySis and I both ordered the Fisherman’s Platter, which turned out to be a ton of fried food. Onion rings, French fries, fried calamari, fried fish fillets, fried mini scallops, fried Ipswich clam bellies (which were SO good), fried shrimp… and cole slaw. I ate only a little bit before I started feeling sick from being full – I think all the fried stuff just got to me – though I have to say that it wasn’t dripping in oil or grease miraculously, and was pretty yummy heated up the very next night for a delicious dinner. The tartar sauce jazzed right up with a squirt of the lemon, and I was very happy. This platter was only $17.95, too!

The bill for the 4 of us and ALL OF THE ABOVE FOOD (plus a child’s milk, four sodas, and remember, two of the fried platters, I only photographed one!) came to a whopping $120 before a very generous tip (my brother treated- thanks BRO!). For all that fresh seafood, you really can’t beat that price.

Yvo says: Its location so very far from NYC proper makes it unlikely that I will go there as often as I’d like, but the prices are super low, the seafood super fresh, and the service super friendly. If you’re ever out that way and are tired of J&R Steakhouse (my normal lunch place when I shop out there for bargain deals), this is the place to go. It’s extremely casual and seats maybe 20 people at a squeeze – it’s really just a fish market with some tables sprinkled around for people who want to eat there – but I can’t see any major complaints or reasons not to go here.
very recommended