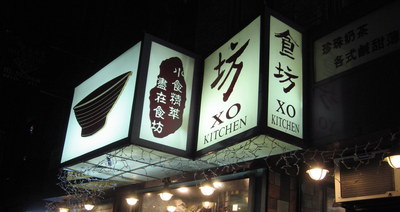 I’d had plans with Cookie to go shopping, but I wound up bailing because I thought I should clean. (I’m sorry!!!) But I wanted to hit up Chinatown to pick up some goodies for the Lunar New Year – knowing nothing of what exactly I’m supposed to pick up, and you’re totally going to die of laughter after you hear what happened – even though that’s insane. I avoid Chinatown on a regular basis because of the crowds, the hordes of tourists getting in your way stopping every 2 feet to look at counterfeit bags, and the old grannies who don’t hesitate to hit you with their bag or umbrella (and it was meant to rain last night!) if you get too close to them as you try to slip past.

As I was plotting out my route to go in, get my stuff, and get out, I was chatting with StB; we both lamented the lack of a traditional Chinese dinner that night, despite it being the biggest eating holiday in any Chinese person’s year and us being food-obsessed. On Lunar New Year Eve, the tradition- regardless of province!- is that everyone gathers to eat a huge meal, with certain items included to represent what you want in the coming year. The traditions tend to deviate from here- exactly what items and why, but the standard still is to have a huge meal. The lightbulb probably went off at the same time, so we made plans to go have dinner. Noting that we only had two people, we opted for actually non-traditional food in every sense of the word- HK Cafe food, which is American/Western dishes with an Asian flair. Probably the original Asian fusion; it answers the questions of how did I grow up with my dad making borscht… without beets? Stir-fried spaghetti with soy sauce and celery, no tomato sauce in sight. Stuff I grew up with, adore, but could really only be classified as Chinese food because only Chinese people make or serve it. We’d both been craving it since it’d been a while since either of us had had it, and we’d recently read this article.

Not the dreaded Americanized Chinese food (a la takeout), but rather, Chinese-ified American [Western] food. Delicious. 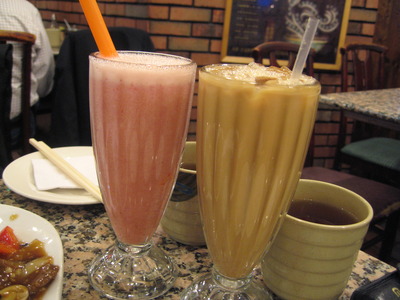 It was really warm last night, so we both opted to get cold drinks. StB had strawberry juice, while I chose lai cha over ice – literally, “milk tea”, a Hong Kong specialty.

We pored over the menu while the waitstaff regarded us suspiciously- good little Asian girls should be home eating with our families. Our discussion of dishes revolved around how best to incorporate the few traditions we wanted to stick to; finally, we decided to go with family style and picked 3 dishes.

I forgot to mention before- Chinatown was miraculously empty. It was like being there, as StB pointed out, past midnight. There were way more tourists than Asian people, who were all home feasting with their families on tons of homemade goodies. This restaurant, and many of the others in the area, was near empty, and we were pretty much the only Asian people in the restaurant aside from the waitstaff (and a table that hosted Asian and non-Asian people).

Chinatown on Lunar New Year Eve is the perfect day to go- completely empty. Unless you want the authentic getting pushed over and people squatting on the street etc. Then by all means, any other day of the year. 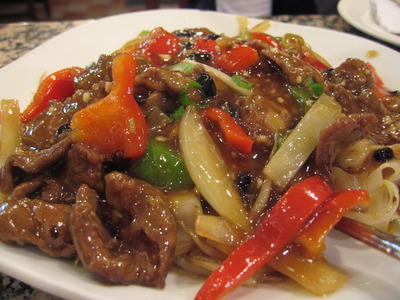 The beef ho fun noodles with black bean sauce were ordered for noodles represent longevity; you will always find some noodle dish at a Chinese banquet for this reason. I’d been worried the black beans might overwhelm, but they were scattered throughout and the garlic was more clearly present than the black beans, which made for a delicious sauce. The vegetables were all still very crunchy but cooked, which I loved as a counter-texture to the soft, pliant broad white noodles. Considering we were at a cafe, these were pretty good- StB suggested they were too cornstarch heavy but I thought they tasted fine. Next we opted for a fish dish- baked fish with cheese over rice. This is a classic HK cafe dish- but both of us were surprised when it arrived. I usually get it where it’s all creamy and white, no tomatoes, and a different kind of cheese as well; this one had very thinly sliced mozzarella layered on top that melted and then turned super crispy under the broiler. I admit this was especially delicious; the leftovers even made it into my bento today! Traditionally, since the word for “fish” in Chinese sounds similar to prosperity, you’re meant to eat fish and not finish it, keeping it. We actually didn’t not finish it on purpose; it was more that we were very full after eating the above noodle dish and our next dish, so leftovers were taken. Yum. I liked this dish especially as it wasn’t overflowing with cheese- I love cheese very much, but sometimes it’s nice to have a lighter dish, especially when you’re mixing starches as we were. 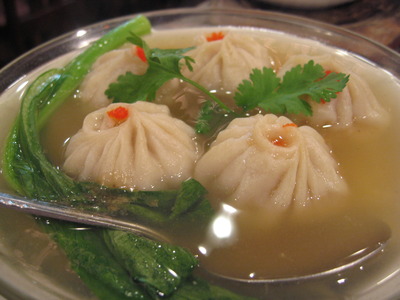 Our third and final dish were pork buns with shark’s fin in them; our loose interpretation of the eating-dumplings-because-they’re-shaped-like-taels [monetary unit; gold ‘bars’ that look like hats to me]. These were only alright; as they’re sitting in a giant pool of broth, the bottoms tended to be soggy and mushy, while the rest was great. The roe on top added a nice salty counterpoint, and the dipping sauce provided on the side was good but gingery. I was only meh on this dish. I much prefer the Shanghainese “originals” you can find at other places.

too bad the bottom was so soggy

Yvo says: Yum overall. Good selection of dishes with a lot of specials written in English on the walls, one of my problems when I go to regular Chinese restaurants, the specials are always written only in Chinese! The menu here is in good English and Chinese at the same time, and the food is definitely recognizable but with an Asian twist on everything, which is great for the uninitiated or even a group of people where some people want Chinese and some people want Western style food. Pleasing. I would go back if I were in the area, though I have another place I like to go to that is a few blocks away for my Chinese-style Western food. This place definitely satisfies the tastes of a HK Cafe.
recommended

PS Also cute and of note: 8 is a super lucky number in most Asian cultures. I’m not sure if this is for all Asian cultures, but in Cantonese/Chinese, they like things that rhyme with or sound like good/prosperous/lucky things, which is why eating fish is considered good luck, etc. As for rhyming, 8 rhymes with the word for “fortune” – our bill came out to, with a generous tip, $18, which in Cantonese rhymes with “DEFINITE FORTUNE” (one-eight = yut baht = sut faht, in my very terrible Cantonese). I amused myself with this while we were splitting the bill and happily suggested giving a rather large tip since on the Lunar New Year, to show you are prosperous, you’re meant to give other people money (if you’re married and they’re not).