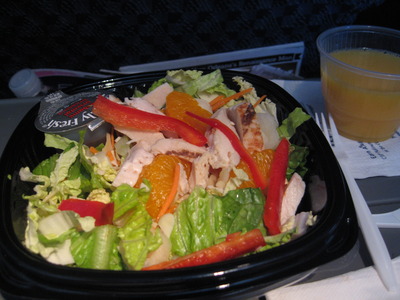 My careful planning helped us avoid airplane food (read: disgustingly overpriced nastiness) on the way to San Francisco, but our hunger and stomachs got the better of us on the short flight back. I obediently handed over my credit card and paid $5 each for two of the above… some “Asian salad” bullshit. I hate when a salad is called Oriental/Asian because… do “Mandarin” oranges really make it Asian?! Along with sesame dressing… of some sort…

In any case, this salad was actually not that bad. I was bleary from trying to sleep through the whole flight (one way to fight hunger but mostly my method of dealing with my overall distaste for flying: sleep the whole time), but I was pleasantly surprised as the salad was fairly fresh and the oranges (possibly canned) were sweet, not a hint of tart, which is my big fear with oranges in general. The sesame dressing was pretty good as well, and though the cup looks small, it was just enough for me. The chicken wasn’t dried out, either, though it was all white meat. So, for $5 a salad, and considering it was enough to fill us each up (remember, we each got one though), not bad. 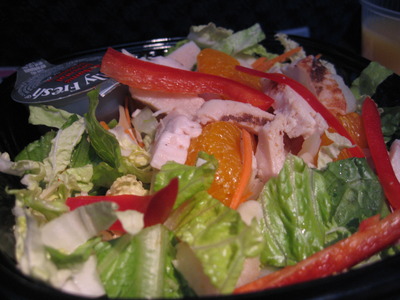 **We were on American Airlines from SFO to JFK.

Yvo says: In a pinch, I think this salad is some of the better “buy your own food on the plane” meals available on our domestic flights (barring Continental, which actually still serves meals on their flights). Another airline whose name escapes me at the moment offers stupid things like potato chips, “snack box” which contains nothing healthy- it’s a few items of various candies including Nestle Bunch-a-Crunch (which tastes good, don’t get me wrong, but come on!), processed cheese and crackers, and I think pretzels of some sort. That’s just gross, for $5, that’s a MEAL? COME ON. Anyway, this surprised me but I had extremely low expectations.
not bad, recommended if you have no other choice (forgot to pick up food in the airport or bring food from home)