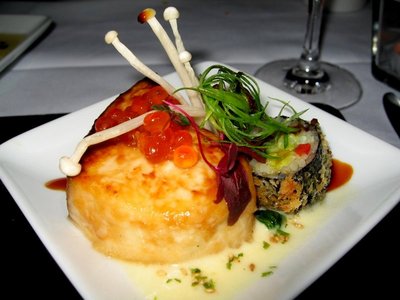 This picture may look familiar to you.  It was taken at Roy’s back in July 2006, one of my favorite Asian fusion restaurants, of a dish that I discovered, in that instant, I would love.  Crave.  And return to order a few times more.  I just really like this dish- misoyaki butterfish, as they call it on their menu.

So when last week FreshDirect‘s President’s Picks included Wild Alaskan Black Cod Fillet for a measely $11.99/lb., I jumped at the opportunity.  (Disclaimer: While I realize that I could possibly get this cheaper by going to a fish monger on the streets of Chinatown or otherwise, I am terrified of getting bad wares and getting ripped off.  With FreshDirect, they never do wrong by me- they bring me what they would have picked for themselves, it’s always so fresh and on, and if it’s not, a quick phone call garners me a store credit for their mistake/mis-pick.)  I wanted to have a go at recreating the very dish I go nuts over. 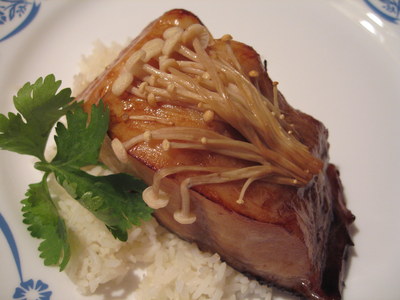 I can say, with absolute humility, that I did a damn fine job with my approximation.

As expected, the fish that came was fresh, with the briny smell of the sea if you put your nose to it.  I had to consider carefully, since I do not stock miso in my pantry generally and find it a bit intimidating trying to figure out what kind to get.  In the end, I forgot to get miso and instead soldiered on with a different glaze, aiming for a similar taste. 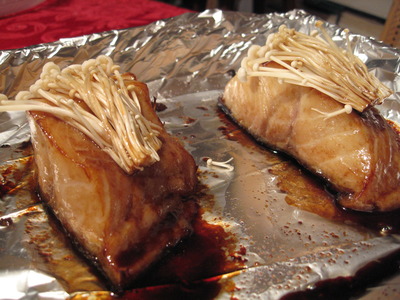 for easy cleanup, I lined my baking pan with tinfoil

Rinse fish; pat dry.  In a small dish, brush fillets generously with glaze, flipping to make sure it is completely coated.  Let marinate for at least 30 minutes or longer (depending on how thick the fish is). 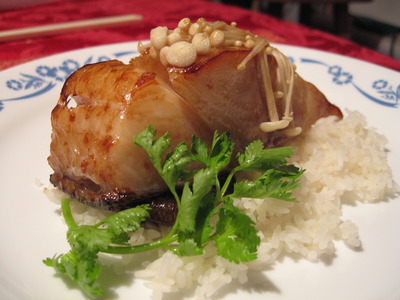 Preheat broiler.  Brush fish with more glaze, then broil for 4-6 minutes, allowing the glaze to caramelize and turn golden brown around the edges.  Remove from oven; lower to 375.  Brush with more glaze; replace in oven for about 5-6 minutes more.  DO NOT OVERCOOK.  (Don’t ask me how to know; I just followed these times and was alright, even with one piece of fish being a lot thicker than the other.)

In the meantime, clean some bunches of enoki mushrooms.  Pat dry.  Place on top of fish fillets and drizzle with a little of the glaze; broil for 2 minutes.  The mushrooms will be just gently cooked and delicious. 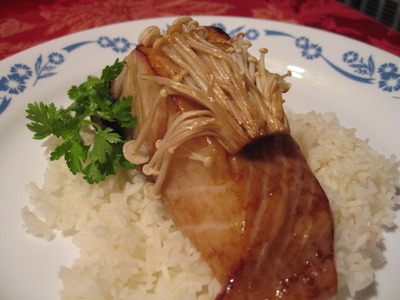 I served this with white rice, though there is any number of accompaniments (most involving some form of rice!) that will go perfectly with the fish.  If you would like to use some of the sauce on your rice, or dip your fish in it, please bring it to another simmer in your pan first to kill off any germs you may have transferred from the fish to the sauce while brushing.  I would also have liked to serve it with baby bok choi, but unfortunately forgot to pick that up as well.

We were in heaven; FeistyMom even declared that she’d gladly pay $30 for this dish in a restaurant (considering she generally eats in Chinese family-style restaurants, this is a huge compliment).  YUMMY!!! 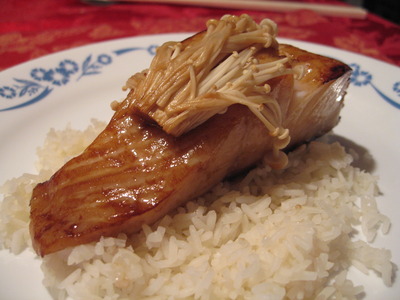