to my darling father for having me, and to the lovely person who nominated me.  (more on that at the bottom)

So as we all know, yesterday was Father’s Day.  Most of you don’t know that I lost my father, after a long battle with renal cell cancer that metastatisized, about six and a half years ago.  It’s a hard day for anyone, I would think, who has lost their father- through death or otherwise- but it must be even harder on my mother… so I do my part to try to keep her happy on this day.  Thinking about other things.  We celebrate his birthday, father’s day, their anniversay and even the anniversary of his death, by having a meal in his honor.  Usually we wind up sitting around after dinner, talking about memories, while BF listens since he hadn’t the good fortune to meet him… it’s always a good time.  I don’t know, this year, I just didn’t feel like talking about him.  I’m not sure why, but this year it hurt a little more than last year…

In any case, I decided to grill up a bit this past weekend, at my mom’s house in Queens (because there’s no way I can hide a grill in my apartment in Manhattan…). 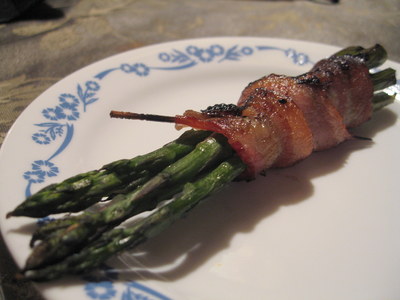 Bacon wrapped grilled asparagus… super easy and so fancy looking!  Well, not this one.  I kind of walked away for a minute and it caught on fire.  Ah… I think if I put them on the George Foreman Grill, it’ll be okay… (Blanch trimmed asparagus in salted, boiling water for 3-4 minutes.  Wrap with bacon; grill until bacon is crispy/cooked through.) 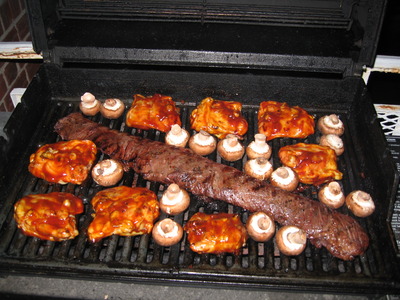 A picture of the grill…

The skirt steak was deeply marinated and very flavorful; my only complaint is really more a criticism of myself.  I think if I’d cut it into 3 pieces, it’d have cooked more evenly; as the center portion was much thicker, it came out much rarer than the rest (which was medium, medium rare, perfect for the four of us).  No one complained though; once it was done resting, I cut it into 3-4 inch pieces and the rare part was left untouched, so someone will have a nice lunch – once you heat it up, it’ll cook right through, and still be delicious.

The creminis were brushed with the homemade honey BBQ sauce and so juicy and yummy once they were cooked through.  I’d meant to also cut up some green peppers to throw on the grill and brush wtih the sauce, but I forgot… just as well, since my brother can’t eat peppers without getting heartburn.

As for the chicken thighs, so simple and so good.  Just throw them on the grill, skin side down, and brush with BBQ sauce repeatedly on both sides as you keep flipping them until they’re cooked through.

Heat in a small sauce pan over low flame, stirring every so often and making sure it doesn’t burn or stick.  That’s it.  Garlic is strictly optional.  It’s so yummy and easy, it’s almost like, why bother with the bottled stuff ever again?!  My mom liked this and reserved the remaining sauce to use on the leftover chicken. 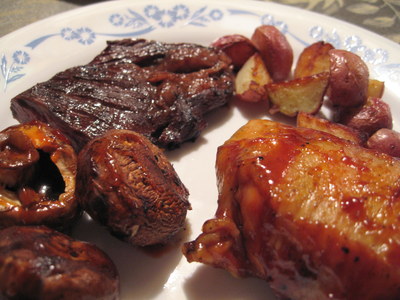 A picture of my plate… boy was I stuffed!  The last dish, which my mom kept raving about, was the potatoes.  These are super easy.  It’s just the beginning of my Texas hash – microwave potatoes on HIGH for 5 minutes (after piercing the skin with a fork), then slice/dice/chop or whatever is your preference.  Add to a hot skillet with a decent amount of oil in it, and fry till crispy!  How easy!  I also, at the last minute (though ideally this would be done in the beginning), added thinly sliced garlic to the oil, which deep fried to golden brown and crispy, like garlic chips.  Delicious!!! though it didn’t add too much flavor to the potatoes since I added it kind of late.  Haha.

I hope everyone had a wonderful Father’s Day filled with all of the kinds of things you like.

One last thing before I go- as I mentioned before, someone nominated me for thie Culinate Grill Me thing- remember Culinate?  They wrote up a lovely profile on me a few months ago.  And now, they are running a contest where you can vote for your favorite food bloggers to go to Napa Valley for a few days (coincidentally, it’s the weekend of BF’s birthday) in order to attend a two-day grilling course!  I would love to go… if you guys think I’m worthy, of course.  Even if you don’t want to vote for me, you should register and vote for someone because that enters you, dear readers, for your very own chance to win as well!  Good luck!!!  Good luck to all the other worthy food bloggers out there as well!