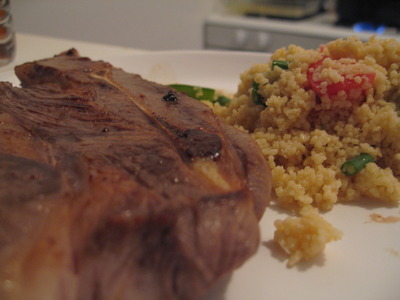 Last week, Fresh Direct had a sale on lamb shoulder chops.  Have I ever made lamb shoulder chops?  No… Have I ever made lamb?  Not exactly – that Valentine’s meal was prepared by my sweetie (with help from me, as he is a novice in the kitchen).  But you know, BF really liked the lamb that time, so I’ve always thought to myself that I should make lamb again.  Fresh Direct nudged me back in that direction last week, so I succumbed.

At their suggestion, I decided to use fresh rosemary.  Looking up a few recipes, I came up with a simple marinade…

I whisked that all together, then dipped my lamb shoulder chops in it, coating on each side and marinated in a big dish in the fridge from about 9 am until the nighttime (wound up being around 7:30 that I cooked it, but I took them out of the fridge at 6 to bring them to room temperature).

When I was ready to cook the ‘chops, I heated up my skillet to pretty hot, rinsed off the marinade (scraping the rosemary bits off especially), patted the chops dry and cooked them for about 5 minutes on each side, then put aside to rest.  That came out to medium rare, perfect for us.  Feel free to cook them longer; these came out perfectly tender, juicy, soft, and flavorful… not gamey at all.  Loved it! 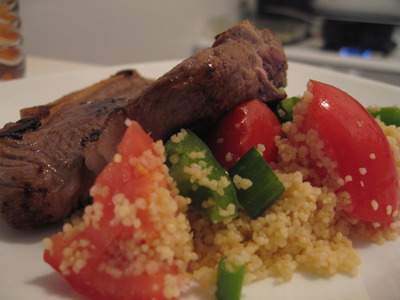 For my side dish, I decided to make my first attempt at couscous- a rosemary couscous salad, that is!  I was especially keen because I wasn’t sure I liked rosemary (honestly, in the first dish, you couldn’t taste it as a strong flavor), and I’d concocted a method to infuse the couscous- which I’d heard absorbs any flavor you place in it- with rosemary.

I took about a cup of good olive oil (really good olive oil, actually) and put 5-6 sprigs of rosemary into the bottom of my skillet.  I heated the whole thing for about 5 minutes on medium-low heat, strained out the rosemary sprigs and set it aside to cool.  I made the couscous- about 1.5 cups of couscous- by putting the couscous in a big glass bowl, heating 1.5 cups (equal amount of broth to couscous) of low sodium chicken broth to boiling then pouring the whole of the broth over the couscous and covering it (I happened to use a Pyrex glass bowl/storage container, so I just put the lid on).  After 8-9 minutes, I opened it up and fluffed with a fork until there were no lumps.

At this point, I discovered I don’t like rosemary in a strong manner- I poured some of the infused rosemary oil over the couscous and stirred it altogether, to keep the balls from sticking, but after tasting some, I decided against adding too much of the oil and wound up with quite a lot of it leftover (anyone want some rosemary infused olive oil?  Anyone who’s coming to the NYC Foodie Meetup this coming Tuesday?  I’ll bring it for you if you say you want it and will use it…).

Originally I had planned on using cucumber but when I grabbed my cucumbers, I discovered they were more than a little past their prime, and as I was planning on serving this as a cold side dish, I couldn’t use old cucumbers.  So instead I grabbed a green bell pepper, a tomato, and my scallions, and chopped up each to a decent pile of veggies.  I added these all to the bowl after the couscous had cooled off significantly, and then tossed it altogether with the juice of a lemon or two, to taste.  I went easy on the cracked black pepper but seasoned liberally with salt (to taste, again), and found myself a delicious cold salad to accompany my lamb.  The rosemary oil echoed back the flavors of the lamb but since I’d added so little, it wasn’t overpowering and really was just perfect. 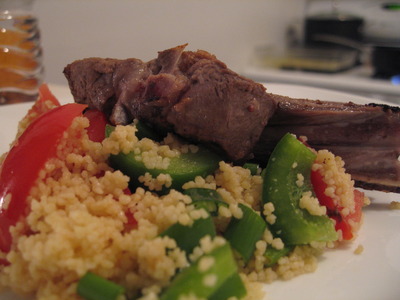 I highly recommend this salad or a variation of such.  BF had said “I don’t think I like couscous” but I’d shrugged it off and said, “Here, try a bite,” and he wound up loving it.  Don’t you just love this guy?  This is really a perfect cold side dish for a hot summer day (like today, even!).  Plus we had enough leftovers for a few days.  Yummy!