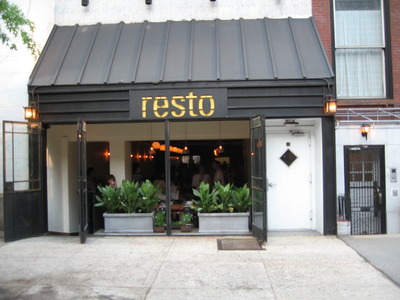 Somehow, a combination of intuition, foresight, craziness, someone or other (it wasn’t me) had their finger on the pulse of the NYC Foodie World, and about a month ago, we scored reservations to Resto for last night.  (For those of you not in NYC, or who don’t give a hoot about the NYC Foodie World, the New York Times’ restaurant critic, Frank Bruni, dropped his review of Resto yesterday.)  I didn’t read the review before we went, so as not to taint my perspective, but I did think the place was unusually packed for a Wednesday night.  Then again, maybe it’s always like that.

In any case, we found ourselves assembling outside Resto and peering in eagerly at the crowd.  At 7 pm, there was already a decent crowd smashed up around the bar area, and our table (directly inside the large, open windows seen above) was a bit set apart from the crowd, but then not.  The place isn’t that small, but with fairly spread out tables, and our table for 6 (they don’t take reservations for less than 6, and anywhere 6+ they automatically charge 20% gratuity; anywhere 8+ and they require you order from your choice of fixed menus) was extremely wide.  I felt far away from the person sitting directly across from me, but like we were about to share a huge family feast, which was nice.

On to the food… 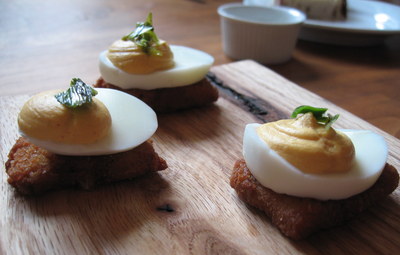 I started off with the “deviled eggs on pork toasts”, wondering exactly what a pork toast was.  I have to say, I think I could die happily stuffing my face with these.  The pork toast apparently was deep fried, crispy and delicious pig skin.  It might have been battered first, because it felt like there was an outside, but whatever it was, it was delicious.  My deviled eggs tend to have chunkier yolks (celery, bell peppers, pickle relish, etc.) but these appeared to be blended smooth, contrasting perfectly with the crispy pork skin. 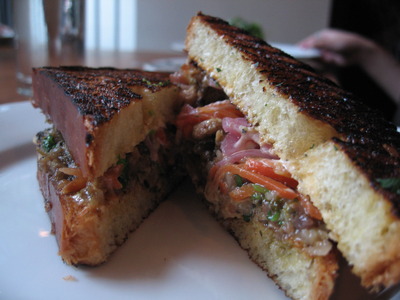 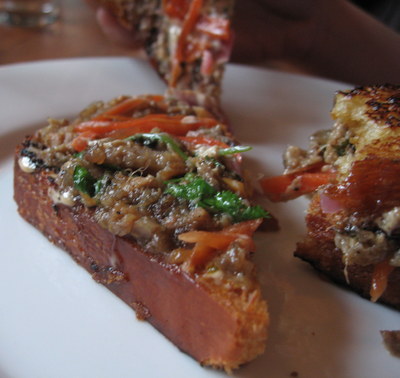 StB, as always going for the secret menu items, ordered a “secret pork sandwich”.  Inside was pork, crackling, an assortment of delicious items, though the sandwich was fairly small, to our surprise.  Since this is an “off the menu” item, I’m not sure how much it was (StB?).  I believe she liked it, though she didn’t feel full and wound up ordering something else a bit later. 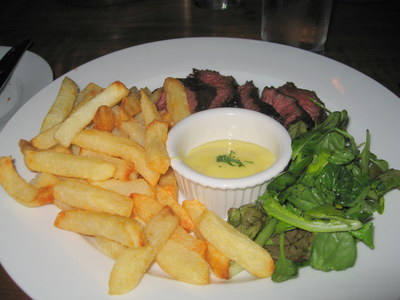 HB’s steak frites were well-received; though she’d thought she was ordering something different (on her way to the restroom, she’d seen a table being served a brilliant dish with two filets on it), she enjoyed her steak. 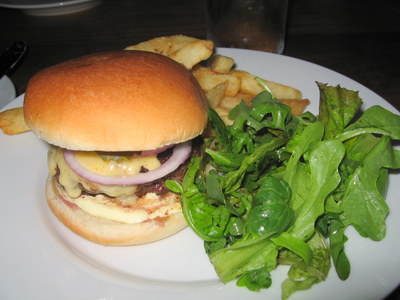 BB’s burger was quite yummy, from my understanding.  Some sources say that it is the combination of beef cheek, hangar steak and fatback that make up the burger itself which lends to a juicy interpretation of the burger.  Though BB removed the onions, she left everything else as is, a bit of a surprise since I know she doesn’t like cheese in general. 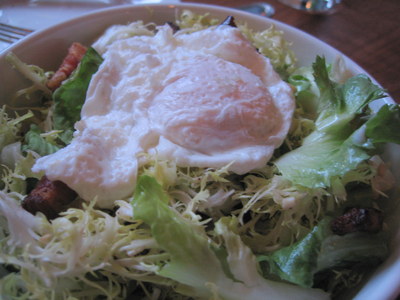 StB ordered the poached egg over frisee, and really enjoyed it. 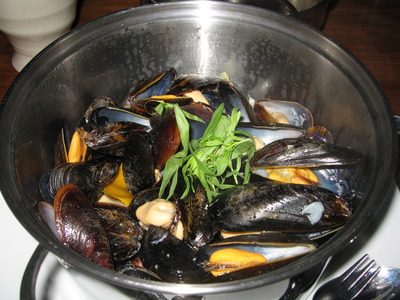 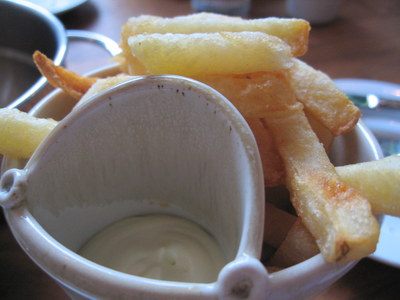 As for me, I went with the moules frites, with witte ale, garlic, etc.  I must say, the fries were delicious, and I don’t say that lightly.  I like fries.  A LOT.  My stubborn stupidity (I should have just snagged one of SpB’s mussels, instead of ordering my own portion) at trying mussels again- I didn’t like raw oysters for the longest time, so recently, I tried them again (after maybe 5-6 years of not liking them and never eating them) and discovered my palate had pleasantly changed.  I like them now.  So mussels, yet another bivalve, why not?  It turns out, nope, I still don’t like them (after having not eaten them for 7-8 years, I would guess).  I can’t say they weren’t fresh, and they were tender, plump, juicy (and this is completely different from what I thought they’d taste like- in my experience, they have been dry, almost hard and chewy, grainy – not sandy, but rather, the chew to them was more like an organ than a bivalve- so it was pleasantly surprising to finally have ‘good’ mussels, I suppose), but still just not my thing.  Some of them were so tender that removing them without the darn thing falling apart was a task!  But I enjoyed them to the extent one can while eating something they aren’t that fond of…

I would definitely like to go back sometime soon to try some more things, the burger for one or the quail perhaps…

We were all pretty full by this time, but opted to share two desserts amongst the six of us, as is our usual habit.  ShB has been going on and on about liege waffles for I couldn’t tell you how long now, and since they sounded so good, and it was getting increasingly chilly at our table in front of two huge, open windows, we declined ice cream and went straight for the waffles (two orders). 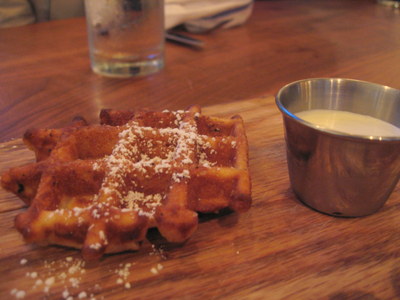 (this is one order)

Honestly, I felt though they were alright – just like regular waffles with some crunchy bits in them – dipped in the accompanying creme anglaise, they were pretty good (much better with than without).  I’d thought creme anglaise would be… something else, I suppose, but it was tangy, almost like a natural yogurt would be.  It definitely brought the liege waffle to a new height though.

Yvo says: If you can endure the long wait times (no reservations accepted for parties of less than 6!), and your arteries aren’t begging for a super cleanse, you should definitely go here.  The food was consistently enjoyed, the service was pleasant, helpful and not in-your-face about anything, and I thought the prices weren’t that bad either.  (My share – appetizer of deviled eggs, entree of moules frites, part of dessert, tax and tip – came to $35.)  The atmosphere is casual, laidback and enjoyable, though very loud (we had trouble hearing each other over the din), and very comfortable.
highly recommended