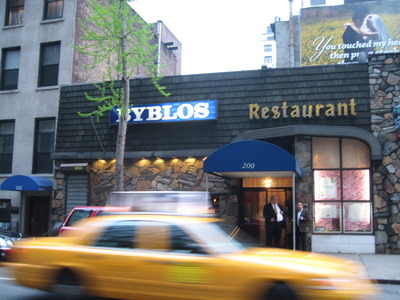 Despite eating more than my fill of kebab in Turkey & Greece, Byblos- a Lebanese restaurant – caught my eye when I saw the many positive reviews on MenuPages.  I was curious to see how good their lamb would be in comparison to Greece/Turkey, though I had a good idea it wouldn’t be as good, perhaps it would come close. 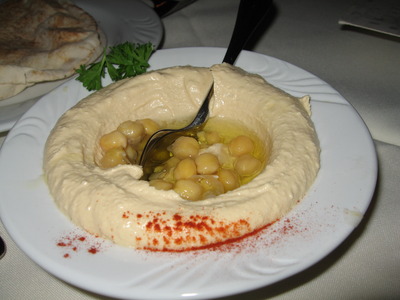 For those of us who were early/on time/not quite that late, they’d placed on the table some pickled vegetables and some flatbread.  The pita was thin and delightfully chewy, but cold and not that interesting, unfortunately.  We decided to order hummus, as all of us love hummus, but the pita with the hummus was only good and could have been better had the pita been served warm. 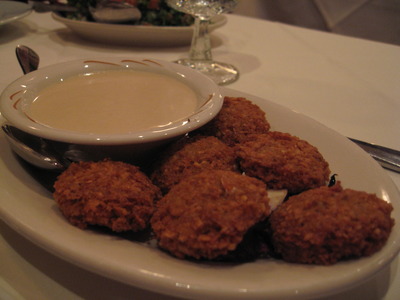 Wisely, someone ordered the falafel, which arrived deep fried goodness alongside a slightly spicy dipping sauce, which reminded me of hot sauce mixed with yogurt.  The falafel was delightfully crispy and yummy. 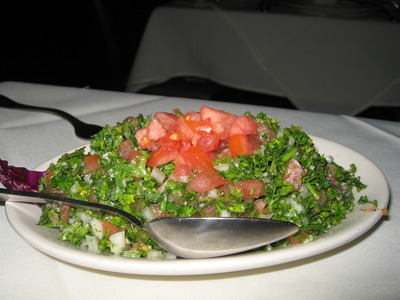 StB ordered a chopped salad of some kind, which she enjoyed very much. 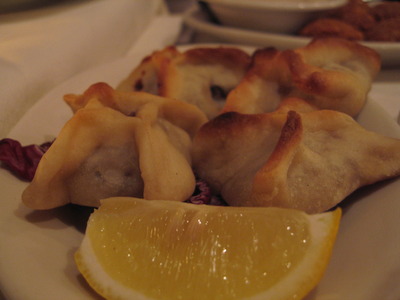 Two people ordered meat pies or vegetable pies, which looked like the above.  I heard good things about them, but I can’t tell you exactly what… 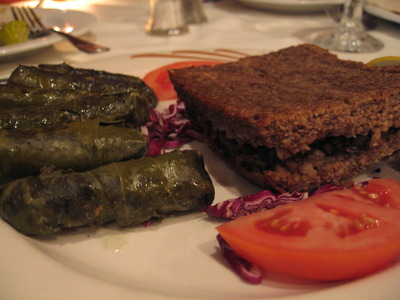 I ordered the grape leaves (dolmades) with kibbee – “ground lamb with burghul, baked.  I had no idea what to expect; I asked about burghul and was told it was a kind of grain, so I’d thought it might be like a fried rice dish, so I was surprised when it came looking like lasagna, but not.  The waiter had assured me that they were well known for their lamb, and it wasn’t gamey at all, so I dug in eagerly.  The grape leaves were horrendously gamey and after 2, I couldn’t force anymore down.  The kibbee, on the other hand, tasted pleasantly of lamb but not the gamey taste I was dreading.  It was yummy, although after eating half of it, I found the texture a little too dry and crumbly for me, so I began dipping liberally in the hot sauce/yogurt combination provided with the falafel.  That made the texture slightly more bearable. 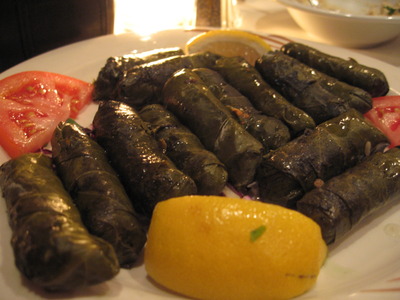 I felt bad for SpB, who had ordered just dolmades, but she said she didn’t think they were that bad.

Yvo says: Overall, not a bad place for authentic Middle Eastern cuisine (Greek, Turkish, Lebanese cuisines all seem somewhat similar though each with their own twist, but the same or similar names).  I would go back, though I found the location a bit annoying- it’s only a few blocks from Grand Central, which means it is completely out of the way for me and not in an area where I could hang out after dinner.  The food was yummy, and the place was fairly empty at night- I’ve a feeling it gets busier during lunch hours or perhaps late night, when the belly dancers arrive and the live music starts- so it’s a solid middle of the road for me.
middle of the road- okay/not bad if you’re in the area