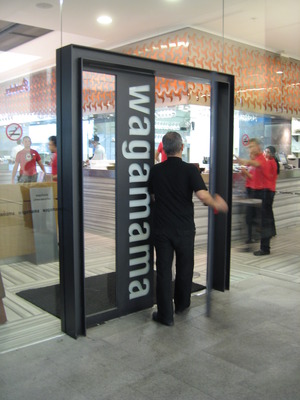 Having heard about Wagamama through tastingmenu.com a while back, I was excited to try it when I noticed it in a mall directory in Turkey.  I know, a supposedly authentic Japanese ramen chain in Turkey?  What were we thinking?!  But regardless, there don’t seem to be plans to open one in NYC (we’ve got plenty of delicious, authentic ramen here, thankyouverymuch), it was raining fairly hard in Istanbul, so we decided to go to the luxury mall in town- Kanyon, an open air, futuristically styled mall on the edge of town.  The mall was huge and I managed to score a beautiful Furla wallet for 50% off retail.  Nice.

In any case, after days and days of meat, meat and more meat, my friends (and myself, a bit less but still somewhat) were all craving authentic Asian food.  I guess what you grow up eating really does make an impression on you when it’s dreary out.  This provided the answer to that… sort of. 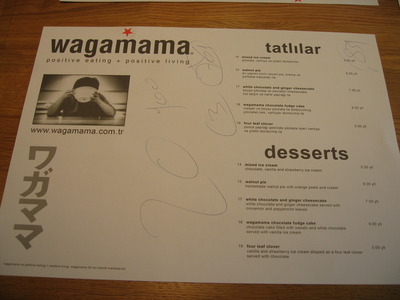 After we ordered and the waiter had zapped our orders off into cyberspace and the kitchen with his nifty PalmPilot type device, he scrawled a bunch of numbers on our placemats/dessert menus.  We later realized it was so whoever brought our orders out would know which order belonged where.

The menu was actually fairly cheap- it was lunchtime on a weekday afternoon, though- offering a choice of Lunch Set menu A or B.  Lunch Set A came with a main noodle dish, a fresh juice choice (orange, orange apple, etc.), and a choice of “side dish” (on the menu states that they don’t have “starters” or “appetizers” but rather, dishes that are meant to be enjoyed with your main dish), for around 19.90YTL, equivalent to about $13USD.    Lunch Set B was the same, minus the “side dish”, for about 14.90YTL, or about $10USD.  Not a bad deal at all, considering ramen itself generally runs around the same price without any extras. 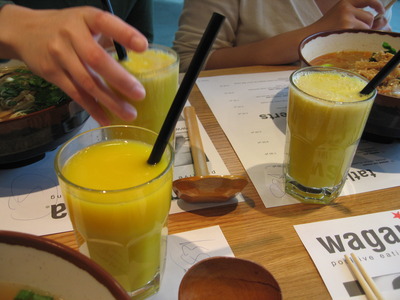 Unfortunately, being that we were in Turkey, a predominantly Muslim country, there were no pork options on the menu, though there were seafood choices (I’m not sure if you can eat seafood like shrimp as a Muslim?- I admit that my knowledge is fairly limited).  Generally, the standard choice here in NYC is pork, as it is fatty and adds a ton of flavor to the broth.  In any case, HB and I opted for the standard chicken ramen, while MD chose the chili chicken ramen.  HB and I are not huge fans of spicy food, so as the description proclaimed chili chicken ramen to be in a “spicy chicken soup”, we passed. 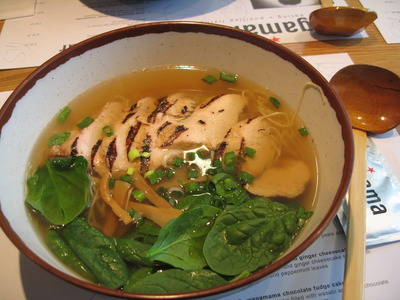 While the broth in our chicken ramen was very clear and ‘sweet’, it was also a touch on the bland side.  The chicken itself was completely tasteless, having never met salt, so I liberally added some of the chili oil from a container on the table.  That perked it up a little bit, though it lent itself to an oily taste for the chicken.  The noodles themselves were on the thin side, and HB said she didn’t think they were very good.  I thought they were alright, fresh and gummy, but I prefer my ramen more “medium” thickness and al dente.  I wouldn’t go here again or rather, I wouldn’t order the same thing (as the only ones in the US are in Boston, it’s doubtful I’ll be going anytime soon). 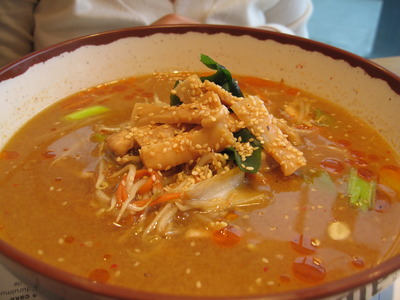 MD’s chili chicken ramen turned out to not really be spicy, and was a lot more interesting and flavorful than our chicken ramen.  She actually really enjoyed her dish, unlike us.  Though it had the same noodles, the broth was definitely better and tastier.  I tried a sip and kicked myself for not braving the supposed spice of the dish.  Much better. 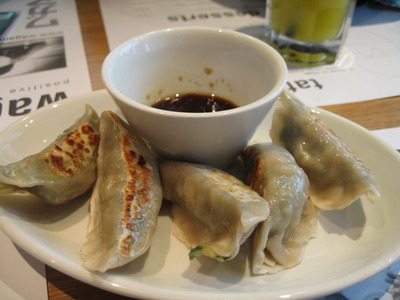 For our one side dish, I chose gyoza – traditionally pork, here they were chicken dumplings with an assortment of veggies inside, served with a chili garlic dipping sauce.  The gyoza themselves were fairly bland, but the sauce was spicy.  Yes, actually spicy, though it wasn’t billed as such on the menu.  Too funny.  Still, these were only alright.

Overall, a cheap and filling lunch, but definitely not the best ramen I’ve ever had.  It suited its purpose.

Yvo says: Meh, if you’re stuck for a place and in a totally foreign country like we were, it serves a purpose and fulfilled our craving.  It was also fairly cheap for a weekday lunch.  Otherwise, I would pass.
middle of the road leaning towards … ‘meh’