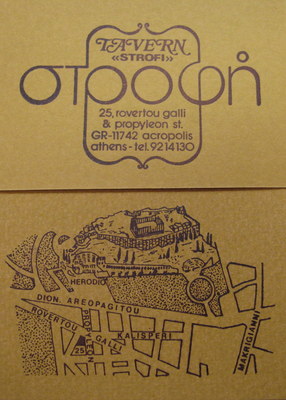 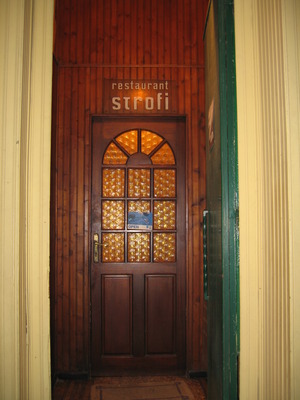 After our terrible flight from NYC during an ice storm into Milan, then Athens (we missed our connecting flight, obviously), we were exhausted and cranky.  Exhausted from having to wait on the runway for 5 hours while we were “in line” to have our wings de-iced – I am fairly claustrophobic and needed to knock myself out in order to prevent a panic attack – cranky from the lack of real food during this time, and having our first day in Athens basically wasted.  We’d aimed to arrive around 2 pm, so we’d have had plenty of time to walk around and get a feel for Athens first, but instead we arrived closer to 7:30 pm and decided to just have dinner at a nearby restaurant mentioned in our guidebook.

This proved to be a wise choice; a short walk from our hotel and an extremely friendly proprietor made the experience complete.

We chose to start off with “taramasalata”, our first experience with such a dish (so we thought, but a quick peek at our trip to Turkish Kitchen proves otherwise).  (Taramasalata is essentially a fish roe spread.  At another place we went to, the proprietor came out and told us that it’s basically yogurt, potato and fish roe mixed together; sometimes they use bread instead of potatoes.) 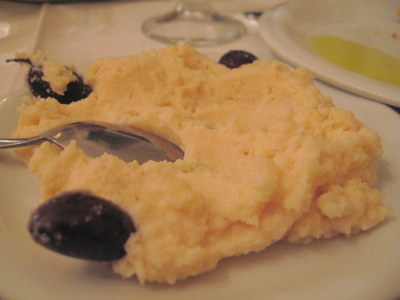 This was by far the best version of this we had anywhere in Greece or Turkey.  Thick with the overlying flavor of the fish roe without being overpowering- we spent a good 15 minutes discussing the flavors, noting a hint of onion, but none of us guessed the potato ingredient (if there was in this dish, that is), we could not stop spreading our bread with this.  We almost filled up on it… but it was so good.  This was also the only place where it wasn’t pink; it was suggested that perhaps the quality of the fish roe or the kind played a part in that, but this was definitely the best we had despite or perhaps because it was different from the other places.  Delicious.  (I wouldn’t mind some right now…) 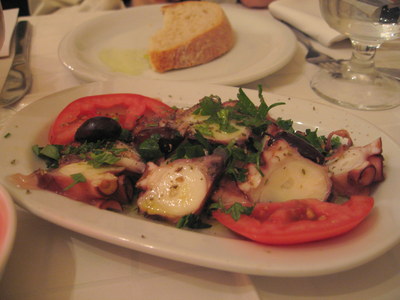 We’d read somewhere that grilled octopus was another traditional Greek dish, and so we ordered this.  Another great choice- it came almost like a salad, dressed with olive oil and fresh herbs along side hearty slices of tomatoes.  The octopus was grilled to perfection- not overcooked nor raw (though I’ve eaten raw octopus, which is spongy and briny tasting, yum), it had a slight bouncy chew to it (for those who’ve asked me what octopus tastes like… I am going to attempt to describe it) with a clean bite.  It’s hard to explain – it’s much like squid that has been cooked exactly right; not chewy so much as bouncy.  This was also a yummy beginning. 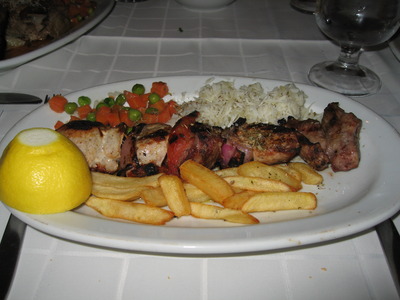 As we’d been told by a Greek native friend of mine, kebab is a traditional Greek dish, so HB ordered this as our first experience with kebab in Greece.  I recall that it was extremely tasty and we all liked it, but not much else.  This was the beginning of all the fries though- for some reason, wherever we went, they served fries with everything.  Not that I’m complaining, but it was interesting. 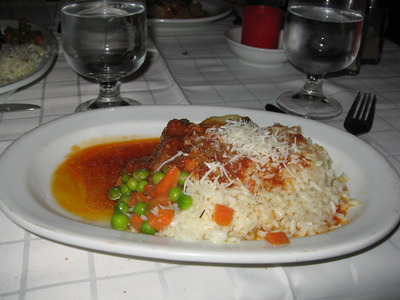 Unfortunately, being that it was quite a while ago, I do not remember what MD ordered, just that she liked it a lot.  I know I tried some and I know I liked it, but I just cannot remember what it was- it feels like it was lifetimes ago that we went. 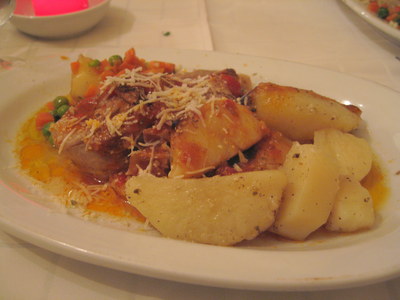 I’d heard or figured out that lamb was abundant in Greece and supposedly fantastic.  I mention now that I do not like lamb in general.  I’ve made it once and even though it was good at the time, it still had that underlying gamey taste that I associate lamb with.  My brother has spoken of lamb that has no such gamey taste, and I always thought to myself, “So it tastes like beef?  I don’t get it… isn’t that what makes it lamb?”  But NO, I was wrong.  This lamb dish- kind of stewed but yet, not- was so tender, soft and delicious, still tasted distinctly like lamb but without that metallic lamb/gamey taste to it.  It was absolutely scrumptious.  I loved it.  I learned the next night at dinner that even the crappy restuarants can do lamb properly.  I’m not sure if it’s just the way lamb are raised here in the states, or how fresh they are, or what, but lamb in Greece was consistently delicious, a fact evidenced by the three of us, all non-lamb-eaters, chowing down on lamb nearly night after night after night.  Delicious. 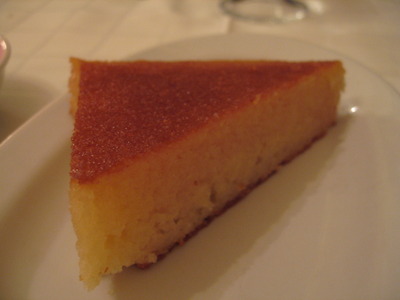 MD and I, though stuffed beyond belief at this point, opted to try a dessert- an almond cake.  The dense cake was moist with a syrupy sugar concoction and was addicting, though not something I’d eat a lot of nor order on a regular basis.  I enjoyed my portion but not quite so much as MD.

Finally, satisfied, we trooped up to the roof garden to enjoy the view. 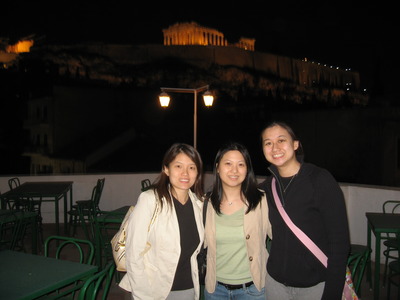 Yes, that is indeed the Parthenon in the background.  We were very impressed with the fantastic view and walked happily back to the hotel for a good night’s sleep before all day sight-seeing the next day.  Later, we learned that there are great views of the Parthenon from all over the city.

Yvo says: Parakalos (please, in Greek), go here!  I realize most of my readers are in NYC, but when next you happen to find yourself in Athens, the food here was delicious and the service extremely friendly and delightful.  We didn’t have a bad dish out of the bunch and we all went home with fully tummies and smiles on our faces, despite being tired and grumpy.  This was definitely our best meal of the whole trip, and it wasn’t expensive, either (I can’t remember actual numbers right now, but I am positive we didn’t break 100€ for the three of us, which isn’t bad considering all of the food we got.  Delicious.
highly recommended