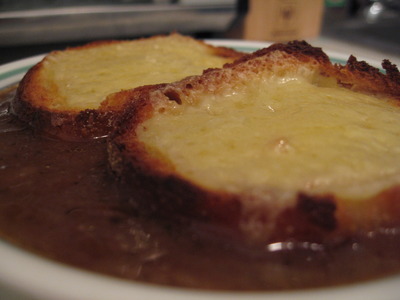 Right now, it is raining/snowing/hailing outside.  I don’t know what you call it; I just know that it is slippery to walk through and with the umbrella up, I feel as though someone is dropping pebbles on it as I walk.  It bounces when it hits the snow-covered sidewalks, and while you might say “But fresh snow is so pretty”- yes, it is, but I live in Manhattan where fresh snow at 9:30 am is as rare as a free cab on a rainy day.

In any case, with the recent “rash” of soup posts everywhere (Far East Cafe Seaweed Soup from Avenue Food; Get-Well-Quickly Tomato Soup from Homesick Texan; Onion Soup from Grocery Guy, to name a few) I’d been ready to go on a soup binge.  Last month’s chowder did me well (so well, I made it a third time, with clams), as did the turkey noodle soup, but I thought it was time to start on a different route.  Fittingly, also, I stumbled across a blog round up for February- Soup’s On!  So, here is my entry, but it might not be the only one, as I plan on continuing making soup until the snow all melts.

Having read about (French) Onion Soup on Grocery Guy, and then on Walker New York, I decided to combine the two and come up with my own.  Which bears a remarkable similarity… but yet, not. 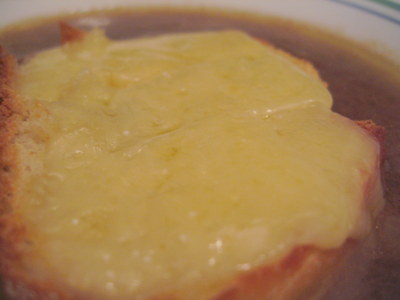 In a saucepan, heat butter and olive oil; add onions.  Let sweat/soften on medium heat.  Stir occasionally.  Turn heat up a bit, let it brown a bit.  Throw a bit more butter on it, add the flour, lower heat and stir until the flour has cooked off the flour taste.  Add wine to deglaze the pan (I used a Rioja), then add stock.  Salt, pepper to taste; continue heating until thickened to your taste.

In the meantime… toast up a few slices of the French bread.  Add slices of Gruyere and toast again, allowing to melt… yum.  Add on top of soup and enjoy!  Happy Eating!!! 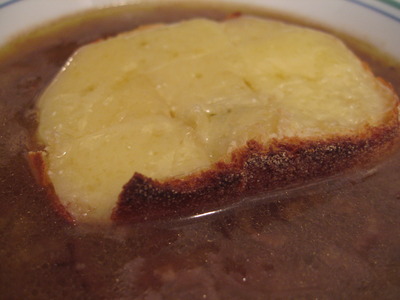 I actually have never had this soup before, so I don’t know how it normally tastes.  BF orders this occasionally in restaurants, and he said it was very good- yay!  I liked it as well but seeing how easy it was to make, I doubt I’ll ever order this anyway!