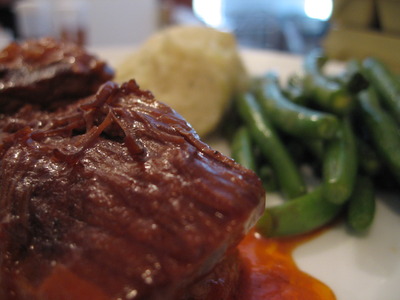 Last week, FreshDirect had a sale on short ribs ($2.99/lb.) so I picked up 5 lbs without worrying that I didn’t know how to cook them. Then I read a bunch of recipes from the FoodNetwork website and realized none of them suited my needs, so I butchered them all and came up with this. It’s very simple, just takes a long time and some love to go in it. (I had to rule out a bunch of very yummy sounding recipes because… my oven continues to not work. Anyway, I’m not comfortable slow/long cooking in my oven since I still only own all non-stick stuff, which will probably change in a few months.)

The boyfriend seal of approval is very important to me because I have a picky eater. It’s not that he’s a snob, he doesn’t care for food actually, but I need to keep him fed and I am also trying to simultaneously fatten him up. Hence my problem. Any given dish has received the seal of approval if he asks for seconds, wants to bring some for lunch the next day, or requests that I cook it again, sometime soon.

This dish received the ultimate seal of approval, with loud smacking noises, my boyfriend stuffing himself silly with what I’d served him, requesting I make it again almost immediately, and the final push into ultimate status: he named the dish. “Can I call these Yvonne’s Famous Short Ribs?”

What an opening, right? Well, without further of my blather, here’s the recipe, sort of:

I sprinkled salt and fresh ground black pepper all over the short ribs and seared them in the bottom of my deepest, biggest stock pot (because I wanted to prevent splatter later). I removed them after they were duly seared on all sides, then tossed in the onions and let them sweat a little with maybe 2 tablespoons of butter, then deglazed with a few ice cubes of roasted chicken stock. After the onions were good and softened up, I put the short ribs back into the pot and started squirting ketchup over the whole mess, added a few spoons of dijon mustard, the juice of a few lemons, a bunch of sugar, a lot of dashes of Worcestshire sauce, and then finished off with water to cover. I brought it to a simmer over very low heat and stirred every once in a while (it was next to impossible to stir at first, but eventually, it calmed down a bit).

I was stupid, and didn’t think about adding beer until an hour later, so I ran out to the 24 hour deli literally 50 yards from my front door. I stood in the store, as a non-beer drinker and wondered what the heck to get. You see, I’ve cooked with and enjoyed the results of Bud, Coors, all lightish American beers, but I felt that a dark beer would be more appropriate. A quick phone call to my friend, who handed off the phone to her boyfriend… he said Guiness, but I couldn’t find any, so he suggested Newcastle, which I found easily. But my eye kept getting drawn to this pretty bottle… 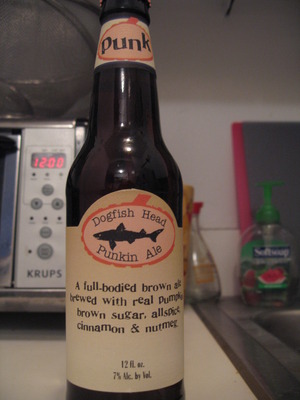 Dogfish Head Punkin Ale; the label said it was a “full-bodied brown ale brewed with real pumpkin, brown sugar, allspice, cinnamon & nutmeg” which sounded like it would go deliciously with the meaty barbecue essence of my meal. I paid the slightly outrageous price of $3.50 for the one bottle and proceeded home to pour it into my bubbling, good-smelling mixture. I took a few sips to determine just how good it would be, but I’m not a beer drinker, it tasted like beer to me and not much else. Either way, the beeriness rendered out and left a wonderfully deep flavor of pumpkin behind; not quite there, an elusive taste that you might catch but then it disappeared quickly as it came. It definitely lent some depth to the overall dish; next time, however, I would add it earlier and cut out some of the water.

So I continued to simmer until it turned into melt in your mouth goodness, with total simmering time somewhere around 2.5 hours, but I didn’t like how thin the sauce was looking. I threw in a can of tomato paste (not the small one) and let that sit for a bit, while it continued to simmer and thicken. While that was going on, and the meat was falling off the bones (and my dog was circling my legs constantly, trying to trip me so I’d drop something yummy for her to snatch) when I tried to stir it, I tossed the green beans I’d previously trimmed into a bit of butter heating in my every day pan, and just tossed it a bunch of times until they looked dark green, squirted some lemon juice on top and voila. That was it.

(The mashed potatoes, I am sad to tell you, were of a mix kind. I was in a hurry and I had the boxed kind leftover from eons ago, pre-opening this website, so I decided to cut that corner and make them. They’ll do in a pinch but are definitely not my first choice.)

If you decide to make this, you may want to lock your dog outside because mine sat next to me and whined the entire time I ate, and she does not normally do this (she gives up after a few minutes). Today, when I was eating leftovers for lunch, she sat next to me again and cried the whole time. (Just kidding! I reserved the bones for her and rinsed them off before giving them to her to gnaw on, and yes, I supervise her the entire time.) I guess the ribs get her seal of approval, too.