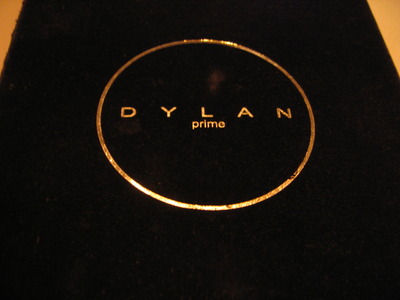 To me, Dylan Prime is in the middle of nowhere.  Some may argue, “But it’s TriBeCa” but I’ll tell you this: it was right off the West Side Highway, right near the Holland Tunnel, and our cab driver had no clue where he was going.  I gave him the street & number, no dice; cross streets, nope; we just happened to find it when he turned off the right street and saw Laight Street.  I felt the area was pretty dead, but yes, it was a Sunday night… still, in the Village, there’d have been people a plenty, walking around, going to dinner, whatever.

Upon arrival, the hostess quickly seated us (it was empty) in a prime corner table facing over the crowd.  It was a booth, shaped such that my date and I could sit next to each other and chat but still see each other, which was nice.

We started the evening off with our standard: crabcake appetizer.  My sweetie insisted that he didn’t want appetizers, so I had the option to go for something I knew he wouldn’t want to try, or.. what I knew he’d eat.  I chose what I knew he’d eat- hey, we both have weight problems, and he needs to gain a few.  Besides, I like crabcakes, and since we always get them at steakhouses, it seemed wrong not to get one here. 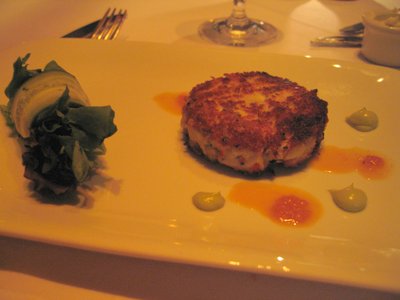 On the left was a pickled cucumber salad, which both B & I enjoyed.  The crabcake itself was deliciously crispy on the outside, and filled with just crab meat on the inside- the way it should be.  I enjoyed the avocado puree; B liked what he thought was apricot smears, but looking at the menu right now, it says it was red pepper coulis- which explains why I kept tasting it and not tasting apricot.  Overall, this was a great presentation and a great interpretation of crabcake- yummy, with its unique points but still on key and not so much stuff to overshadow the star of the dish, crab meat. 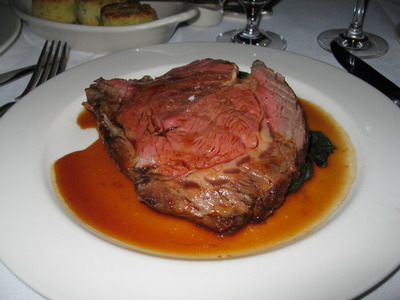 B ordered his standard, the rib eye.  You can’t tell from his picture, but underneath is a load of mashed potatoes, which B immediately surprised me by grumbling, “What the hell?  What if I’d ordered mashed potatoes?  That would have been a waste.  Why wouldn’t they tell us it comes with mashed potatoes?”  (Surprised me because he doesn’t normally complain about stuff like that, although that is something I definitely would have been annoyed over.)  Also, behind the mound of meat is a stack of I think sauteed kale or hard greens that I enjoyed very much, having opted out of creamed spinach (a bit wary from the whole e.coli thing, so I chose to just not deal with that).

Another problem with there being mashed potatoes underneath… that they were horseradish mashed potatoes.  Yes, horseradish is the “standard” accompaniment to rib eye; however, B does not like horse radish and found himself scraping the mashed to one side in disgust, since the steak, being on top of the potatoes, was basically covered in the very liquid potatoes.  The pungent taste was almost unbearable for him.

Unfortunately, this dish overall was a flop in B’s book.  The steak that he’d ordered medium rare- while the dining room was all but bare, mind you- came rare.  Which could be a nice thing, but with this cut of meat, the center was so raw that he had trouble cutting it, and then more trouble chewing it… and definitely trouble enjoying it.  I suggested sending it back, which is next to never for me (usually because if I don’t like it, it’s because it sucks, and sending it back doesn’t do anything except make people hate you), but the fact is, I was positive the steak would taste find if it weren’t covered in horseradished potatoes and raw.  B refused and finally destroyed it enough, making a big mess, that we couldn’t justifiably request they cook it more.  (He even remarked “How stupid to put such liquefied potatoes underneath a steak; when I cut it, it just smooshes around and gets everywhere!”)

Based on recommendations from friends, I opted for the 12 ounce strip steak, medium rare. 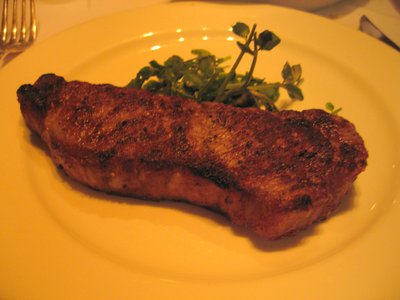 This was served with a small “salad” of watercress dressed lightly with a vinaigrette.  I liked it, but thought it was a bit out of place since generally, steakhouses serve items a la carte.  Either way…  My steak was cooked just right, juicy but well rested.  There was a nice charred crust on the outside, which lent a great flavor to the overall steak.  I didn’t even use their house steaksauce (side note: did the waiter think we were stupid?  When he put a bottle on the table, B reached over to look at the label, at which point the waiter smiled indulgently and said, “It’s steaksauce; it’s our house steaksauce” – uh yeah we know, every steakhouse worth its salt has its own sauce, he just wanted to look to see if the name was on the circular silver label on the bottle [it wasn’t].), having enough internal juices to dabble in, but not excessively so (a sign of an unrested steak).  I was happy and pleased, but not impressed in any way.

Our sides … of course B wanted potatoes, and I wasn’t going to deny him.  With a name like “baby baked potatoes” and a description of roasted garlic, parmesan cream sauce, bacon & chives how could we say no?  However, with my last minute mind-change from the creamed spinach, I had to think fast to make a choice of a vegetable.  I quickly settled on the least veggie vegetable they had: truffle corn and potato cakes.  Hey, it’s got corn in it, right?  (Besides which, none of the other choices would B touch with a 10 foot pole, and I didn’t feel like my pee smelling funny for a few days.) 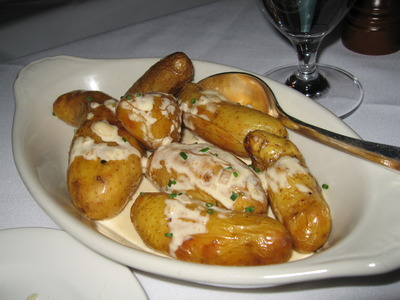 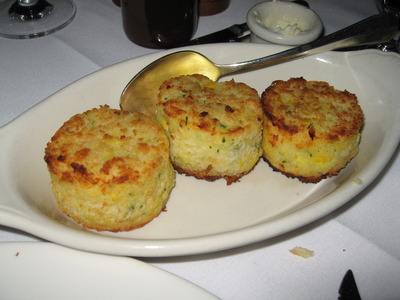 The first dish was a bit disappointing, in that we expected it to be… more… well, tasty.  It was alright, but the sauce wasn’t quite thick enough to really stand on the potatoes, so we found ourselves cutting off parts of the potatoes and dipping them in the bottom of the dish to get some sauce on them.  I wouldn’t order this one again; maybe if they mashed up the potatoes with the sauce- and more of the sauce, I’d have liked it better.

The potato and corn cakes looked promising, but were lacking in… corn.  The insides were mealy in a good way, but just not quite enough; the flavor too subtle to stand up to the steaks we were both eating.  I would like them with more corn, or maybe a cheese sauce of some type, because they were also a bit dry; B suggested a creamy/creamed corn center or mix instead.

Of course, we saved room for dessert.  I opted to indulged in tiramisu, and B chose, of course, the molten lava cake.  (They did not offer creme brulee.) 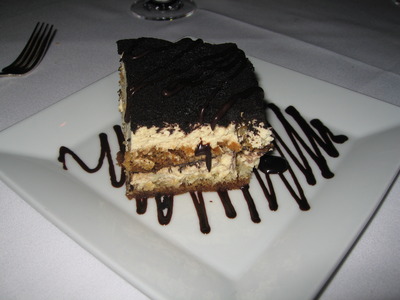 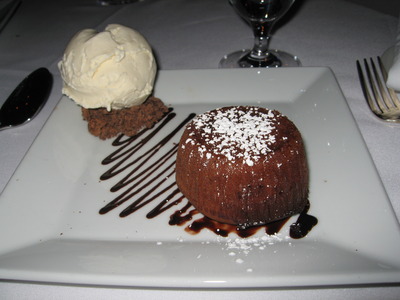 The tiramisu was decadent and quite yummy, but not really tiramisu and not my favorite tiramisu.  I managed a quarter of the piece before having to push it away (when B took his fork and finished off more of it).  Too rich after a heavy steak meal; it was passing but not quite that great.  (I’d asked the waiter if they made the desserts on premises, and he said yes, but I didn’t feel his sincerity- he didn’t seem to really know.)

B remarked with delight that they hadn’t overcoked it and the center was very fudgy; I can only assume here that it was good, more than passing, as he ate it so quickly I was lucky to get a picture, but not so lucky as to get a bite.  He ate every last bit, except left a spoonful of ice cream for me.

Yvo says:  The atmosphere, ambiance, decor all added up to what would be a lovely date place.  I still think it’s out of the way, but other than that, it was solidly good, but not outstanding nor wonderful.  I probably wouldn’t return, because of the location, the price tag (one glass of wine plus all of the above food and a nice tip came out to $175) and because I can get better food for similar prices or less, elsewhere, but otherwise, it’s a solid effort and deserves a recommended rating as such.
recommended