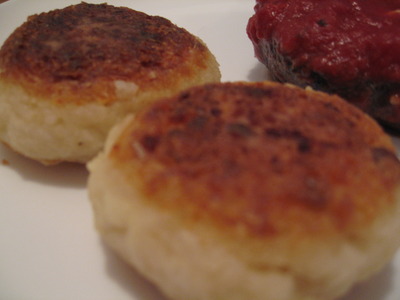 So I’d made pork chops and risotto, but what would I do with the leftover risotto?  A friend of mine had told me that she once messed up risotto (I’m not sure how she messed it up because I didn’t ask for more details) and made risotto cakes with it instead.  Mash them into cake-shapes, then bake.  I decided to give this a go but with some slight modifications, why not?  I shaped these into cakes with a small square of fresh mozzarella in the center, coated them in flour and then fried them gently (medium low heat, shallow oil) until they were crispy golden brown on the outside, and presumably warmed through to the center.

Seriously, that was it.

I served these alongside portobello parmesan that I’d made from this recipe I’d seen on Food Network.  I wasn’t paying attention and assembled them in the “wrong order” (wrong insomuch that the picture isn’t as great as it could be- I plan on making these again sometime very soon, and so will have a better picture of them soon) so I cut the mushroom out of the picture.  If you can, though, try this recipe, it is absolutely delicious and works well if you have a vegetarian coming for dinner.  You won’t even realize the meat’s gone! 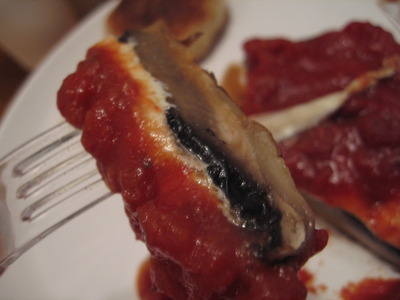 close up of the portobello parmesan cut into- check out that mushroomy yumminess! 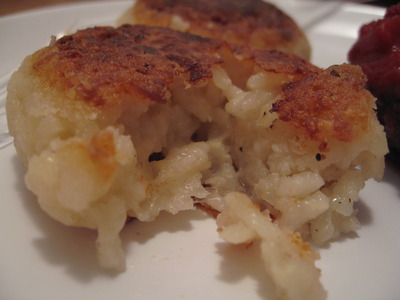 risotto cake broken into; you can see some of the mozzarella goodness

[[I’m back from Mexico but the food was so dreadfully blah and nothing to write about, and it doesn’t even look that good, that I won’t be posting about it.  I stayed at an all-inclusive resort so perhaps that’s where we went wrong, but… there you have it.]]