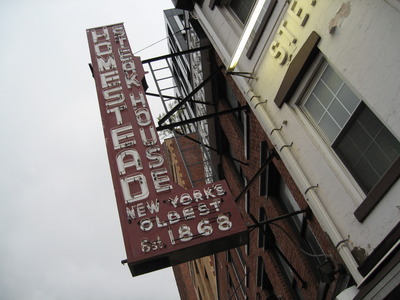 Looking at the quick snapshot I took of the sign, I notice things that I hadn’t noticed prior to the meal (nor when I’d passed it a few times, driving by).  The slight dinginess to the sign, and the almost tangible tackiness it hinted awaited us inside… but alas, it was raining, I was running late, so I just lifted the camera, pressed the button, and ran inside.

My date was waiting at the bar (I hadn’t been able to grab a cab; I’d forgotten that cabs on rainy days in New York are rarer than canary diamonds for less than your first born’s college tuition), enjoying a glass of wine while patiently waiting for my arrival.  The hostess told us that whenever we were ready, our table was waiting.  She seemed in no rush to get us to our table, which was a change from most restaurants that just want you to eat and go.

The decor was distinctly old steakhouse, but the noise level was different.  It wasn’t quite the muted hush of most steakhouses, nor was it loud and obnoxious, but rather just the right mix of pleasant conversations going on around you.  I noted that most of the tables held couples or other male-female parties; the only large group of men I’d seen were led upstairs by the hostess directly prior to her leading us to our table.

The waiter asked us for our drink orders, but when I responded by asking for a wine list, as he turned away, I added as an afterthought, “and our menus?” because we’d been sitting for a few minutes already and hadn’t been given menus.  He returned with the wine list, sans menus, and walked away.  After a long deliberation, we ordered our wine (a 2001 rioja, I forget which winery), at which point the waiter said, “Would you like to see menus, or enjoy your wine for a bit?”  This intrigued me; he was suggesting our meal may take hours, and that he had no intention of rushing us through it.  Definitely not your average steakhouse. 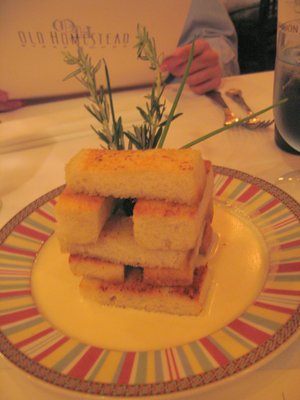 A few minutes later, the waiter came over and gestured towards the table adjacent ours.  “Would you like a bread presentation like that?” he indicated.  Yeah, I would.  I was a teeny bit wary because I’d seen on the menu from their website a special bread presentation… which meant he was basically asking me, without telling me, that it would cost extra.  Not that I was trying to skimp, but rather, I dislike when restaurants appear to try to slick you into getting something you didn’t know you were paying for.  Either way~

I’m so glad we got this!!!  The bread was clearly grilled on one side, and crispy outside with a super soft center.  It was brushed with garlic and possibly olive oil, with a creamy sauce on the bottom for dipping.  Oh my gosh, I was tasting it trying to figure out what was in it: butter, cream, possibly garlic, perhaps rosemary infused?  (I make this guess largely because of the decorative rosemary & chives on the plate- were they there to bring to mind those herbs, or just for looks?)  We took our time in enjoying this while perusing the menu.  Yummy- if you go here, definitely get this.  ($6) 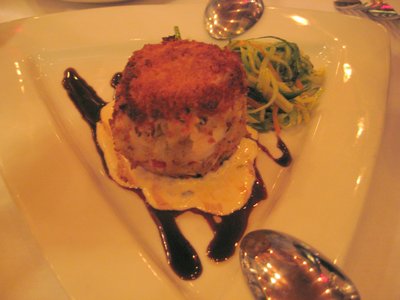 We settled on the jumbo lump crabcake appetizer (right).  When it came, my date remarked “This isn’t jumbo” but I assured him that the jumbo part referred to the crabs that the lump meat came from- and boy was I right.  The crabcake was delicious, with a crunchy top and the rest being all crab meat.  The cucumber salad that accompanied enhanced the natural sweetness of the crab and overall made for a great taste in your mouth.  The sauces also went well with the overall dish.  Thumbs up; things were definitely off to a good start.

Next up were our steaks.  The waiter wasn’t very helpful when I had a question- I’d read online that the sirloin was good, but was uncertain as to which, since there were two on the menu.  He asked me if I wanted bone-in or out and I asked him for his opinion, which he couldn’t give me.  Finally he decided for me, steak au poivre, off the bone.  Big mistake.  Here’s where I made a huge rookie mistake, that I am still kicking myself over. 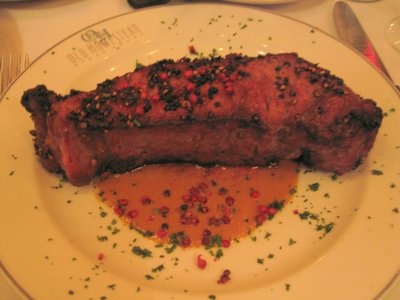 I hate peppercorns, particularly whole ones.  A little pepper goes a long way for me, so to have my steak encrusted with the things really threw my tongue off.  When he said au poivre, I’m not sure what I thought it meant.  I don’t think I even thought about it, I knew I’d seen it and had it before, so I probably just assumed whatever.  Note to self: I hate au poivre!!! 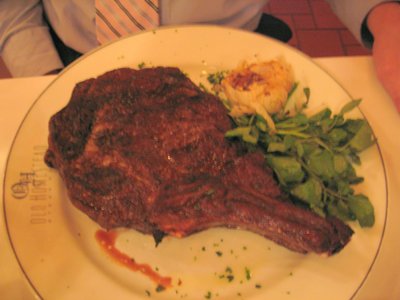 On the bright side, since we are beginning a “Tour of Steakhouses” I’d previously decided that one of us will always get a rib eye, in order to facilitate comparison across various steakhouses.  (Sorry the pictures are getting blurrier; I was starting to drink and couldn’t keep my hands steady eventually, hehe.)

I tried a piece of my date’s rib eye and wow was this one good!  It’s listed as their signature steak and I can see why.  The meat was soft, tender and juicy, cooked to exactly our specifications, and extremely flavorful.  The steak was huge as well, which is definitely a plus.  It needed no adornment and was really quite good.  I was a bit jealous that I hadn’t ordered the same.

As for sides, we chose garlic mashed potatoes, creamed spinach and the sauteed mushrooms. 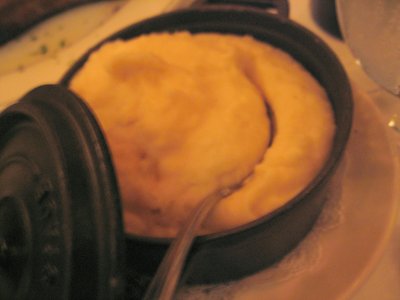 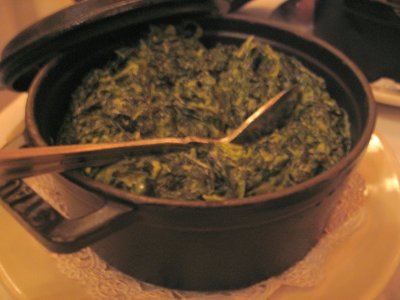 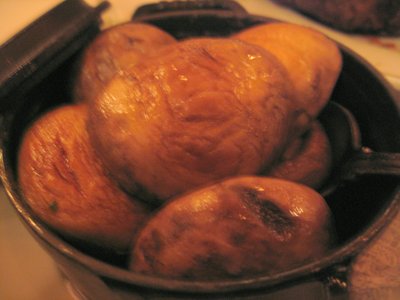 The mashed potatoes were creamy, but overall, just hit expectations.  They weren’t exceedingly fantastic, but they were good.

The creamed spinach was again overall just alright.  It was tasty, but not the best I’ve had nor by any means the worst.

The mushrooms, however, were terrible.  The stems hadn’t been removed, so I expected them to be edible.  They were horrible, hard and uncooked, impossible to bite into without some major jaw effort!  The mushroom caps were completely tasteless and could stand to have at least some salt sprinkled on top or perhaps some of that yummy sauce from the bread dish.  Awful.  Please avoid this.

We wound up packing up a lot of food for our dogs and for later snacking, but we still had room for dessert! 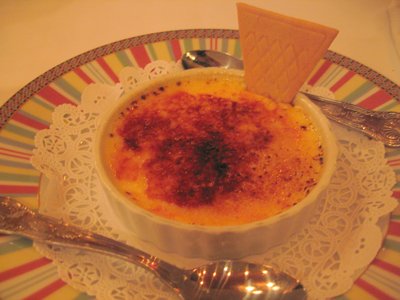 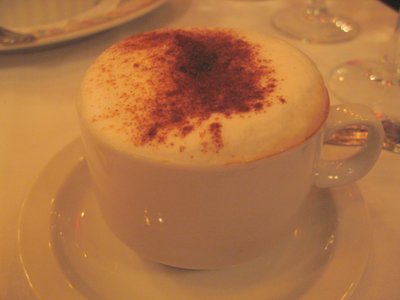 My date chose to get the creme brulee while I stuck with a cappucino.  They gave me a dish with cinnamon sticks, brown sugar cubes, white sugar cubes and assorted sugar substitute packets.  The cappucino foam was thick and very good (though I think I got sick from it, I don’t think my body can handle that), while the creme brulee was only so-so.  The vanilla wafer that accompanied was fresh, warm and yummy, but the creme brulee still fell flat.

Yvo says: Definitely a good overall experience.  The bottle of wine wasn’t too expensive (though still marked up, of course), and I enjoyed not being rushed throughout the evening.  However, it gets points off for location since it’s not very much near anything else for entertainment purposes… and while I’m going to give it the rating of recommended, I will note that I would not return… because of the clientele.  Over the course of the meal, I became more and more disturbed by the surrounding patrons; I do not mind people asking me what I’m eating, if it’s good, or even talking to me (the tables were close enough for our neighbors to peer at us, speak to us without leaning over much, and converse easily with us), but there’s a certain sense of decorum that most of the patrons around us seemed to lack.  I realize this puts front&center my inherent snobbiness, but when I pay that much for a meal, I want the full experience.  I will also theorize with no concrete basis for my theory so you can’t sue me for slander/libel that perhaps the room in which we were dining contained mostly men and their mistresses; Old Homestead’s slightly out-of-the-way location would be great for going someplace where no one will see you.  The women were of a certain type, for the most part, with that air I won’t deign to describe, while the men were your average steak-eating-businessmen… and that is a combination that bodes no good.  Go for good rib eye… once.  Go back if you can stand the crowd.
recommended