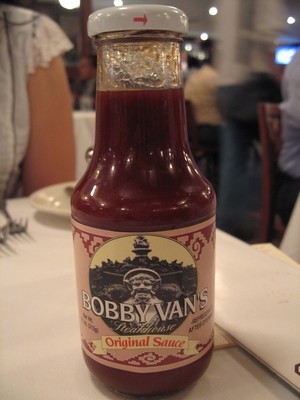 25 Broad Street
(one block south of the NYSE)
website (with menu & prices)
Reservations recommended; do not go here at 1 pm unless you are willing to wait for your food

I have to preface this with the notation that for the past 4-5 Restaurant Weeks in NYC (there are two a year, January & July), the quality of what a restaurant chooses to put on their RW menus have seems to have gone down while the prices continually go up.  At $24.07 for lunch and $35 for dinner this time around, it seems almost not worth it, because for that price, I’d rather just order an entree from the regular menu and get something great rather than order from their RW menu and get three mediocre dishes.

Having said that, a friend and I were game enough to try this nearby steakhouse, because for $24.07, a steak lunch isn’t that bad of a deal… 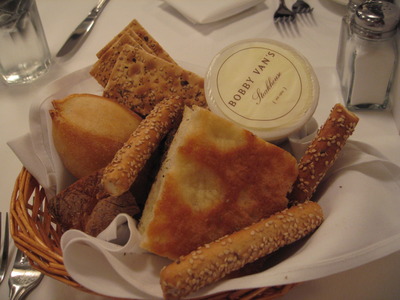 We arrived shortly after our 1 pm reservation and were seated immediately, while a few parties who’d arrived before us waited.  The place was nicely appointed, and pretty bright for a steakhouse, though we both noted that we were on “the grill side” which may or may not make a difference for decor (neither of us had previously dined on “the grill side” of a steakhouse).  Another point to note was that while most steakhouses have fairly dark decor and a hushed atmosphere, Bobby Van’s was pretty loud- we had trouble a few times hearing each other.

One last note about decor; this particular Bobby Van’s is located in an old bank, and the grill is in the basement, which used to be a vault.  There are lots of original fixtures around- the wine cellar can be seen through a glass wall, and the door to the wine cellar is actually an old vault door; near the bathrooms is another huge vault door.  It’s actually pretty cool, although if you’ve been to a few places in the area that are like this, you start to get bored of it because it’s been done.  (My gym actually has a huge vault that they now store t-shirts in.  They had to break the door after someone got locked in, so the door is always open now, though it’s still there.)

We waited for about 5 minutes before someone finally gave us menus; the RW choices were pretty slim.  Choice of soup or house salad for a starter; Atlantic grilled salmon, rigatoni, chicken marsala or medallions of filet mignon in a bearnaise sauce with french fries for a main course; and finally, cheesecake, chocolate mousse cake, or an apple betty for dessert. 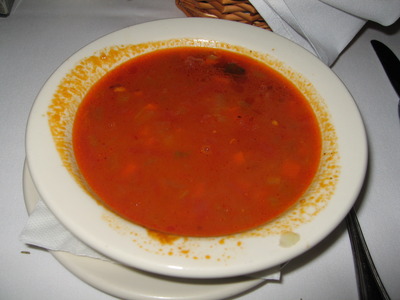 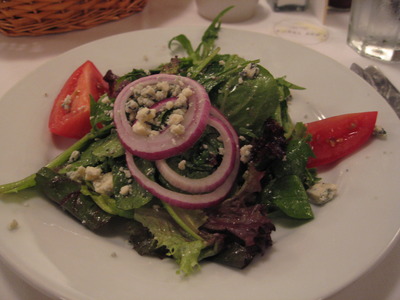 My dining companion chose the lentil soup; she said it was okay, but it was just lentil soup, nothing special.  My salad was subpar.  Though I was pleased that there was a generous sprinkling of blue cheese crumbles on top, the wild greens (I hate wild greens; they always remind me of my backyard, and taste even worse) were wilted and clearly had just been sitting in a big bowl, pre-tossed just waiting to be plated when someone ordered the salad.  (If you plan on serving salad, do not try to save time by pre-tossing your salad with dressing.  It cooks the greens and makes them totally soggy.)  I like crispy greens in my salad. 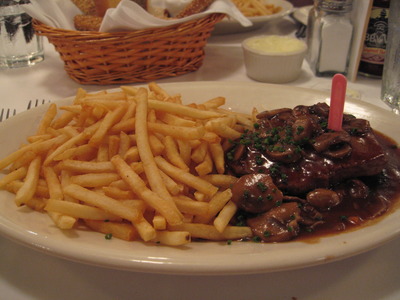 We had both opted for the filet mignon, though it was neither of our favorite cuts of steak.  Why?  Because we were at a steakhouse, and both of us thought it apt to try the steak, not the chicken or the fish.  Besides, as filet mignon has little to no fat whatsoever, it’s pretty healthy

I have to say, the kitchen clearly does not know how to plate food for shit, if you look at the pictures.  However, they do know how to cook a steak.  This was cooked exactly to both of our specifications of medium rare, perfectly.  The picture is extremely deceiving- it looks like there are a ton of fries but hardly any steak (as I said- they don’t know how to plate for aesthetics, but I’ll take good food looking ugly over bad food looking yummy, any day)- but rather, there are two decent sized pieces of filet mignon smothered in their sauce.  (Which actually, I don’t think was a true bearnaise, but I’m starting to feel like I’m being really picky, so I’ll stop.)

The filet mignon itself was extremely soft, practically melting in my mouth.  Filet mignon has little flavor of its own, so the excess sauce they’d slopped onto the plate was a blessing in ugly disguise, actually.  I finished all of my steak, while my dining companion had some leftover.  It was pretty darn good.  I do note here that the sauce had a touch too much wine flavor to it, but perhaps it’s meant to taste like that; I’m not a big bearnaise connoiseur so I have no real point of comparison.

On to dessert… which took another 10 minutes to serve, despite neither dessert requiring more than plating.  Note the lack of plating skills once again (not even a drizzle of syrup/sauce, or a pouf of whipped cream!). 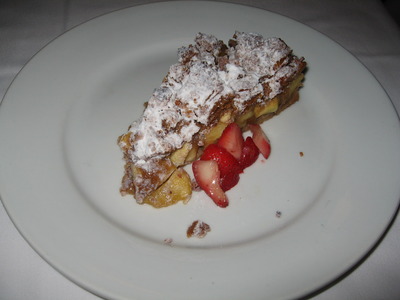 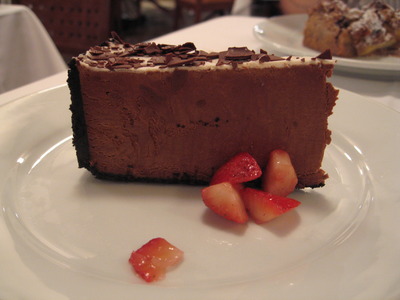 While I do believe good food speaks for itself, this food wasn’t quite good enough to speak entirely for itself.  The apple that I tried was good, not overly sweet, but still fairly standard.  The chocolate mousse cake wasn’t tooth-achingly sweet, either, which was a nice change.  Both of us could not finish our desserts.  (We wised up and asked for the check as soon as our desserts arrived, so we could get out of there quickly.  Our lunch took a little under 2 hours from start to finish.  For a place near all the financial institutions where TIME IS truly MONEY, this is completely unacceptable.  Do note, however, that the place cleared out at 2:05, and the place was next to completely empty when we left at 2:35.)

Yvo says:  The waitstaff was completely inexperienced and incapable of handling a little lunch rush, despite its location and despite having opened in October.  The kitchen may have been overwhelmed by an excess of patrons- there were people who were clearly there just for Restaurant Week- but our waitress should have informed us of this fact instead of just ignoring us during those 40 minutes that we waited.  Despite horrendously poor service, the actual steak was good, and I would probably go back to try other dishes, but at another time and perhaps one of their other locations.  I’m not 100% sure of the prices normally- from their menu, it looks like standard steakhouse range (expect to pay around $150 for two people, with drinks, dessert, tax & tip)- but for RW, this was a great value at $30/person.