I have to say that I’ve been to Cracker Barrel (various locations) more than a few times since the first time I’d heard of it through my sister years ago.  I adore the country store with its old fashioned candy displays, the yummy smells, and the adorable stuff decorating the walls- think TGIFriday’s with one theme: old fashioned- and I just love the food.  It’s always fairly inexpensive and always yummy. 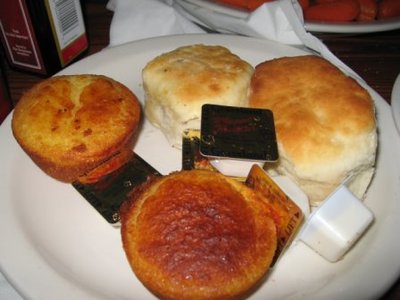 Normally I get the chicken fried chicken, which, if you know me at all, you know is unusual right there.  I don’t like ordering white meat (chicken) in restaurants because they inevitably overcook it and it’s really dry.  They do it just right here, perfectly tender and yummy with this fantastic white gravy.  And with each entree comes three sides… so it’s perfect.

However, this time around was the first time I’d been here on a Friday, so I opted for the Friday fish fry, their Friday special.

A little background: occasionally, I crave fried fish bad.  I’ll order it in various restaurants and inevitably wind up disappointed; too greasy, too much breading, too flavorless, too …. soggy… just… not good.  I don’t even know what I’m measuring these against, I just know that once upon a time, I had fantastic fried fish. 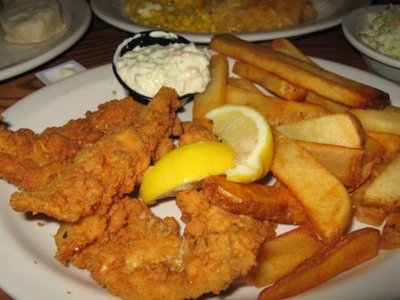 I was not disappointed at Cracker Barrel.  I can genuinely say, for $7.69 (with cole slaw 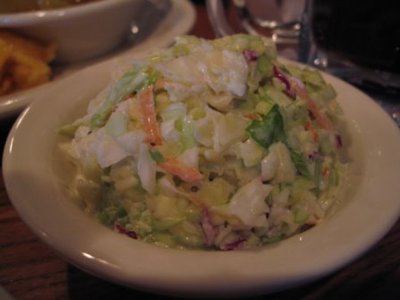 and fries, of course), this is the best fish-n-chips I’ve had in my memory, ever.  (Barring what I make myself) It was that good.  Perfectly crispy, not too much breading, in fact hardly any at all, just the right amount; a thin layer, really, with a thick and yummy tartar sauce.  They also loaded me up so I was munching for quite a while, the fries were good, and the cole slaw was pretty darn good, too! 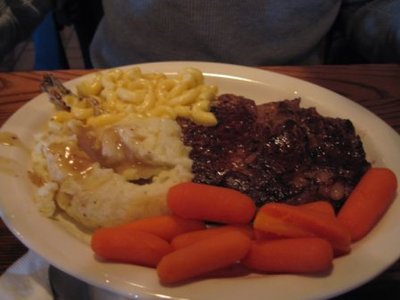 My darling, despite my calm statement “I wouldn’t order steak at a place like this, sweety” decided to order the rib eye and was actually really pleased with his steak.  I mean, it was $12.99, with three sides (he opted for the baby carrots- my baby does love his baby carrots- mashed potatoes and macaroni & cheese), and cooked to his liking.  What more could you ask for?

We also opted, since I wanted more veggies, to get the veggie combo platter, with hash brown casserole (shredded potatoes baked with yummy cheese), baby carrots (I told you he loves ’em!), corn, and fried apples (his choice since he swore he’d never seen nor eaten that before). 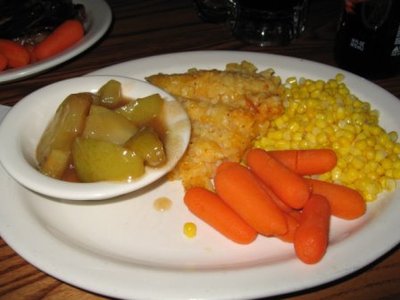 Honestly this place won’t win any Michelin stars but it’s solidly good, consistent at every location, and a nice break from eating junk fast food when you’re on road trips since I find them mostly along major highways on my road trips.  It’s super 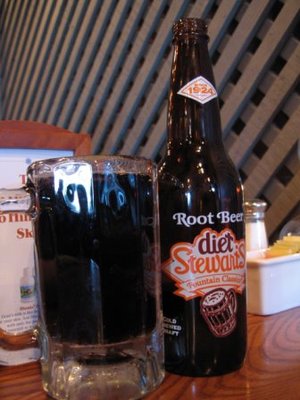 inexpensive, and it’s always fun browsing in the country store while you’re there.  The service tends to be good, with the occasional crappy server but mostly I’ve had nice older women who always call you things like “sugar” and “honey”.

Yvo says: Next time you’re on a road trip and happen to pass one, go on and try it.  I actually generally MapQuest out my trip and find a Cracker Barrel or two along the way so I know I’ll have something yummy and healthy in my belly for my trip.  Consistent quality and inexpensive- is there any better combination?

I forgot to mention the best part.  I ordered root beer for both of us and they give you it in a bottle- Stewart’s, one of the best root beers around- and give you a really frosty mug.  It’s awesome.  It’s how root beer should always be served