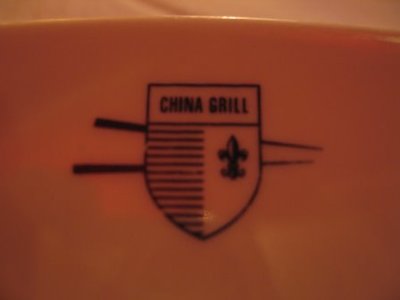 I’ll admit that I was extremely skeptical when my b. told me he’d gone to this place and enjoyed it a lot.  I’m pretty snobby when it comes to Chinese food.  Ok, I’m a lot snobby; I’ve been to the best places in New York (and I think any Asian person would agree, all the best places aren’t owned by or operated by non-Asians) and I know what I like, and I know authentic Chinese food.  But my b. gushed mostly over the desserts, and didn’t try to tell me it was good Chinese food- he just told me he liked the food, and that’s good enough for me.

So one night, he took his two favorite ladies out for dinner at China Grill.  At his suggestion, we started off with the kobe beef tartare (to my surprise!) and the crabcakes. 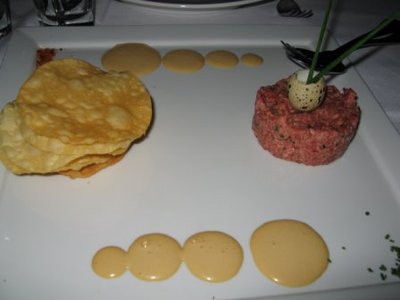 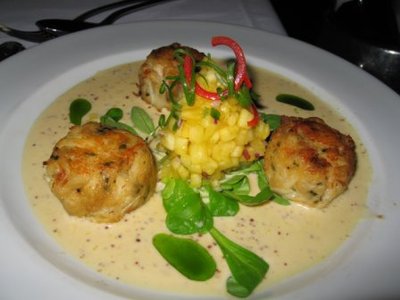 The kobe beef tartare was quite good and went well with the mustard sauce; the deep fried wonton wrappers added another texture to the mix.  Unfortunately my b. knocked over the quail egg while serving us, since he didn’t think we’d want raw quail egg yolk, though I managed to salvage a bit because it is very sweet.  I didn’t try any of the herbs in the corners of the dish.

The crabcakes were good- not the best I’ve had- but the pineapple salsa was very tasty, the sweetness complemented the crab very nicely.

For our main courses, the ladies opted to split- the restaurant is strictly family-style- the miso glazed black cod.  The irony of my choosing this dish was not lost on me: this is/was one of the trendiest dishes that all the top trendy restaurants were doing for a while, the one to be judged on and compared against other top restaurants.  Why is this ironic?  Because I don’t believe I’ve ever ordered it at any of the top trendy restaurants I’ve visited.

My b., being a man and a meat eater, opted for the wasabi rubbed grilled prime rib with a tomato and onion salad on the side. 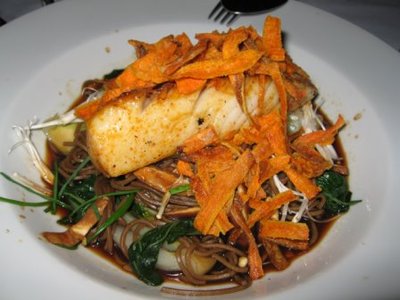 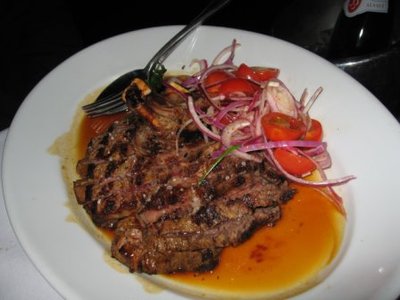 The miso glazed black cod was extremely tender, but a touch bland.  The buckwheat noodles underneath (soba) were a little too salty- perhaps they absorbed the brunt of the flavors? and the bok choi a touch too soft for my tastes (I like my veggies crunchy).  The overall dish was good, but not fantastic.

As for the steak, this was very good, cooked to exactly how he requested this, and super tender.  The tomatoes were sweet with a slight tang from the onion, which made them yummy.

For our side dishes- this is where it gets interesting- I’m not too keen on paying close to $10 for a dish of fried rice, but there it was: duck fried rice.  Since I require veggies, we opted for the crispy spinach. 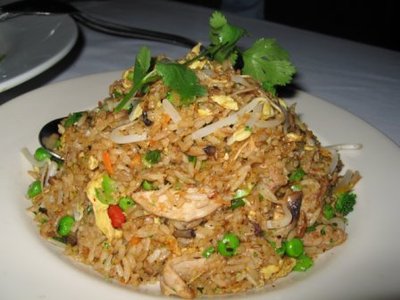 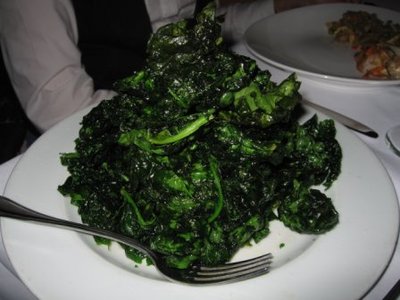 The duck fried rice was sooooo good.  I would go back just to order this, seriously.  That’s how good it was.  It wasn’t overly greasy or oily, like duck can get, but the flavor of duck definitely permeated throughout the dish and made my mouth happy.

The crispy spinach was another story.  My b’s other lady in his life really liked this, gushing that she’d never eaten spinach like this before (neither had I, nor b).  It was paper thin and really crispy (and piled high, which seemed to be a theme in their dishes here).  In fact, I kept wondering if it wasn’t actually seaweed since it had that texture, melted in my mouth.  There was a sprinkling of coarse sea salt on it, which made it too … much for me.  It was pretty oily, too.  I had to ask the waiter (who happened to be Asian, although most of the other servers appeared to be not) how it was made; if it was really spinach.  He told me that it was deep fried spinach and that the secret was to deep fry it in soy bean oil; then he said, a bit snottily I thought, “But don’t try that at home, you’d probably burn down your house.”  I was kind of annoyed at that- you don’t know me, you don’t know my cooking skillz (deep frying isn’t for everyone, yes, but you don’t just say that!) and well, it just seemed a bit odd to say.

Last but not least, the main attraction: dessert. 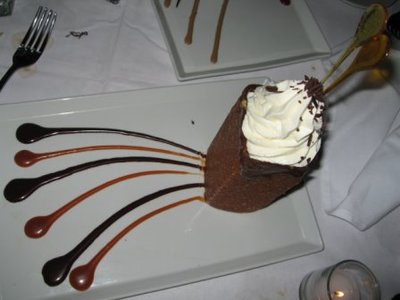 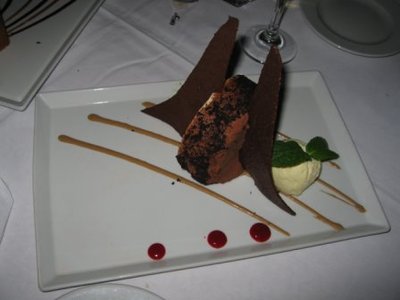 Apperances can be deceving; the bananas in a box had no chocolate to it whasoever.  The “box” was a cinnamon or ginger lacy cookie, which had way too much cinnamon/spice for me.  The bananas were okay, mushy and drenched in their sweetener, so I wasn’t too keen on that.

However, the other thing was really good.  I don’t recall trying the sorbet/ice cream on the side, but the mousse part was really freaking good.  Thumbs up for that.

Overall, the restaurant isn’t high up on my list, but it isn’t horrible.  The food was good, but nothing I’d rave about to anyone for no particular reason (except the duck fried rice, which I just misspelled horribly, oops hehe).  Maybe it was what we chose to order (a few of them signature dishes, bear in mind), but I didn’t feel like this food was really Chinese or even Chinese fusion (where is the Chinese part of crabcakes, or kobe beef tartare- the wonton wrappers?).  It was mostly American fare with perhaps a slight Asian touch here or there- calling this fusion is like calling my cooking fusion since I tend to marinate everything with soy sauce (instead of using salt)!

Yvo says: If you’re not paying (expense account or otherwise), worth a try, maybe just for dessert, to look at them because they are all very pretty and picture-worthy.  Otherwise, *shrug*  I wouldn’t say definitely go here, but I feel like most dishes are hit or miss, and that you should NOT go here expecting Asian cuisine or much Asian influence aside from the decor (although, a shield with a fleur-de-lis for their logo kind of boggles, no?).